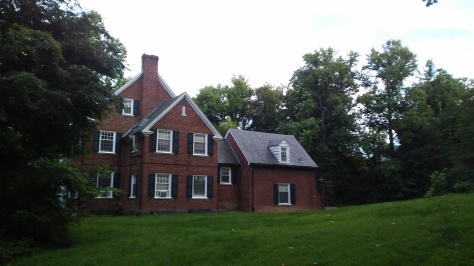 Jefferson Square, in the middle of Jefferson Hall, Bushnell Hall, Combs Hall and what is now known as “Double Drive.”  (That’s George Washington Hall and Dodd Auditorium behind it.)

We just called it “The Quad.”  When I was a freshman at Bushnell, this is where the guys would play “ultimate frisbee.”  My roommate once spearheaded a spirited petition by the freshmen to get stadium-style lighting surrounding the place.  The administration did not accede to his request.

Behind me here would be Jefferson Hall.  I went to a party once hosted by a couple of girls on the third or fourth floor there — the view of the quad under the stars that night was just unforgettably beautiful.  I don’t think I ever hung out with those girls again, or even stepped a foot inside Jefferson.  But, for some reason, that is one of my most vivid memories off my freshman year.

Combs Hall.  This was where I took biology as a freshman.  I also have an unrelated and truly strange story about Combs that I cannot share publicly here. 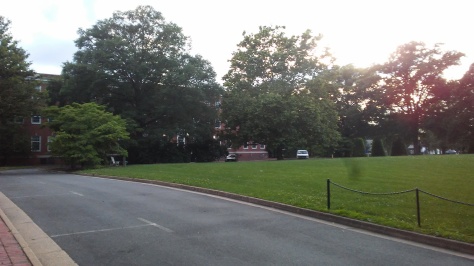 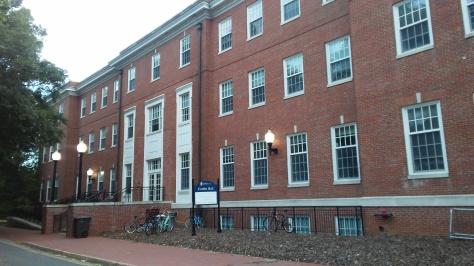 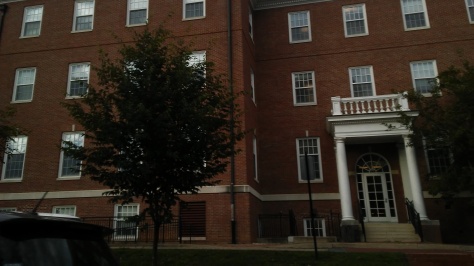 This is an admittedly poor shot of the slightly controversial Bell Tower.  (That’s Randolph Hall beyond it.)  I try not to be a cranky old man, but I do share in my alumni’s collective eye-rolling here.  It’s superfluous, it was no doubt costly, and it makes the southern juncture of Campus Walk feel crowded.

Also, as one of my old psychology professors was in the habit of observing, “What would Dr. Freud say about that?”  It looks like our geographically smaller campus is trying to compensate for something.  In my native New York, the equivalent of the Bell Tower is that guy in the hood who wears too much bling.