I miss these.  I believe I haven’t fired off a bottle rocket since the 1980’s.

We typically had only the smallest ones that you see in the picture below, there at the very bottom.  (Fireworks are illegal in New York.  But, as I’ve mentioned here at the blog before, we  still got our hands on them more often than not.)

There are few greater thrills in life, when you are 10 or 11 years old, than lighting one of these and scrambling madly away before it started spitting the sparks that would launch it skyward.  (We would stick them down upright soda bottles to point them upward.)  There was one kid in the neighborhood who made a show out of holding a lit bottle rocket in his fingers, down at the the very end of its thin wooden stem, but that trend didn’t catch on with the rest of us.

Anyway, a friend of mine from Mary Washington College is a bona fide amateur pyrotechnician now.  You should see the videos he posts — any of the fireworks you see below would be categorically paltry to him.  (Predictably, he lives in Texas.)  That guy’s livin’ the dream.  If I had met him when I was 10 years old, I would have been awed by his avocation. 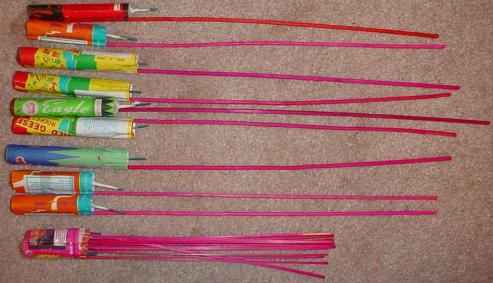