Yep.  I’m pretty sure that this is the telephone my family had when I was a little kid.  It had an actual, physical bell on the inside that literally rang when people called.  (And you obviously had no idea who it was; you had to answer it to find out.)  It was loud too.

The phone was a rotary — it made that weird sound in the earpiece when you turned it.  The fancier touch-tone phones would arrive in abundance as the 1980’s arrived and gained a little steam.  They eventually came to include “cordless” house phones — everyone thought those were especially impressive, even if there was some paranoia connected with them.  “People can listen in in your conversations!,” the Luddites among us would warn.

The phone below was the “downstairs phone,” if I remember correctly.  There was only one other phone in the house; it was in my parents’ room upstairs.  (It was the same landline.)  If one of my older siblings received a call and wanted some privacy, they’d have to ask for permission to to talk up there.

I actually remember learning my first telephone number on this phone — my parents had me practice it a couple of times by dialing it.  If you dialed your own number on a rotary phone, you got a busy signal — as a little kid, I thought that was pretty funny.  (I’m guessing I would have been in kindergarten or the first grade — this was about 1978, about the same time I was thrilled by “The Hardy Boys” and “Nancy Drew” on television.)  I can still remember my family’s first telephone number.

Hey, if you think all this is archaic, you should have heard the stories my parents and aunts told me when I was a kid.  They were old enough to remember the “party lines” of a few decades prior, where an entire street would share a single phone line.  Weird, weird stuff. 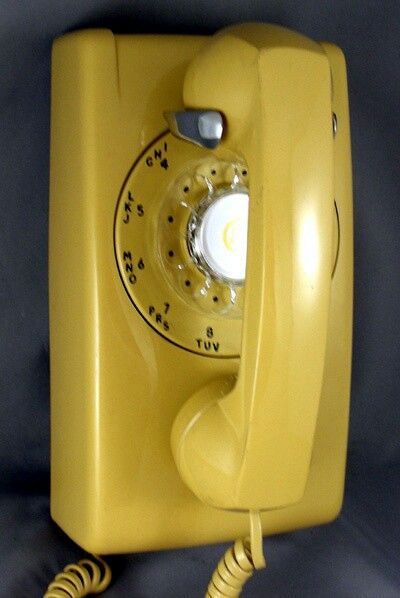