The “Metal Man” action figures are a bit of a strange late-1970’s phenomenon for two reasons.

First, Zee Toys produced them with no backstory — there was never any fictional universe established by a comic book or cartoon or movie.  They just sort of appeared under my Christmas tree around 1979 with names like “Questar,” “Radon,” and the lazily repetitive “Roton.”

Second, they were actually made entirely of die-cast metal.  They were heavy, with more joints and points of articulation than “Star Wars” figures, which were simpler and more cheaply made, if far more popular among first graders like me.

Those two things gave them a lot of mystique to an imaginative little boy.  I loved them.  Sure … they were confusing.  Radon looked a bit like a Cylon from “Battlestar Galactica,” but he wasn’t one.  And how did his “Sky Sled” fly?  Upright, so that he could see where he was going?  Did he just recline on it?  For some reason I spent a lot of time thinking about that — probably when I was supposed to be doing my homework.

Seriously, these were treasures.  I still have the above three, I think.  “Corporal Chrome” looks like he would be fun to hunt down.  And “Major Mercury” deserves his own goddam album cover.

Bugeyedmonster.com has a really neat rundown of the entire toy line right here (and here’s where you can get a glimpse of “Major Mercury”): 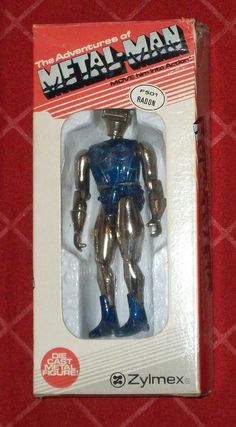