I didn’t realize it then, but these were basically an update of the “Wacky Packages” cards and stickers that kids were collecting a decade prior.  Both series were released by Topps.  (Strangely enough, Wacky Packages was actually re-released at the same time that Garbage Pail Kids debuted — I certainly don’t remember that.)

Wasn’t there another series of cards or stickers in the 1970’s that depicted lampooned versions of cars?  I swear I remember at least a couple of those.  “Crazy Cars,” maybe?  Or “Crazy Hotrods?”  Around 1979 or so, I recall finding a card with an illustration of a “Roachmobile” — probably purchased once by my older brother — at the bottom of my toybox.  I would have been in first or second grade at the time, and I remember finding it creepy.

I myself have never seen 1987’s universally hated “Garbage Pail Kids Movie.”  (It has a 0% rating on Rotten Tomatoes, and it’s often named as one of the worst movies of all time.)  I saw about 30 excruciating seconds of it on a pop-culture website just recently, and, believe me, that was enough.

I’ve read some confusing information about GPK’s still being produced, on occasion?  I saw several lampooning Hillary Clinton and Donald Trump last year, but I thought it was just some independent artist’s mockup.  Were those produced by Topps, though?

Take a look at the last “Garbage Pail Kid” pictured below — “Adam Bomb.”  That actually was a nickname I came up with for my friend Jason’s younger brother, Adam.  But I’d started calling him that years before the GPK’s arrived — it was just a tough-sounding nickname … like he would up and annihilate anyone who messed with him.  I don’t know if this is a New York thing or not, but if you or your friend had a kid brother, you sometimes gave him a tough-sounding nickname as a joke.  It was usually meant affectionately.  My best friend Shawn, for example had a very young brother named Ryan — we referred to him as “Genghis Khan, Jr.” (another one I coined myself).  But kids from blocks away called him “Balboa,” and they’d address him in their best Clubber Lang impression from 1982’s “Rocky III.”

If all of that sounds sweet for grade-school boys in New York, then rest assured — we had some pretty damned creative pejorative nicknames for various kid brothers as well.  I can’t even write them here.

Man, this blog post today is just all over the place isn’t it?

I was going to save this blog post for the summer — I remember trading Topps’ “Return of the Jedi” cards and stickers with my best friend Shawn Degnan at the end of my driveway on hot July afternoons in 1983.  (It was also where we traded baseball cards, stickers, and … even rocks, when we were both tots.  We were both quite the childhood collectors.)  I’m running this today, of course, following Carrie Fisher’s passing.

“Return of the Jedi” cards were huge.  I was 10 when they went on sale at the local family “drugstore” — which was a couple of miles away; seriously, a lot of New York is quite rural.  I seem to remember a couple of “Star Wars” cards floating around at the bottom of my childhood toybox, too — but those were released when I was a tot, and too young to collect anything in an organized fashion.

These came in bright red wrappers, with a hard, occasionally brittle stick of truly cheap pink gum.  (I am a little confused by a Google image search that shows yellow packaging.)  The dust from the gum would sometimes pepper the cards and make them smell like the gum.  I relished that scent as a kid — it meant the cards were new.  There was also one sticker per pack, but you never peeled it off, as then you could not trade it.  I think I had all the cards pictured below.

The Holy Grail of these cards was one that Shawn had and I did not — it had an image of Han Solo being unfrozen from carbonite in Jabba the Hutt’s palace during his rescue by Princess Leia.  (I’m confused again by the fact that I can’t seem to locate an image of that card. 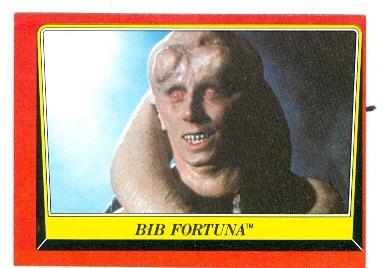 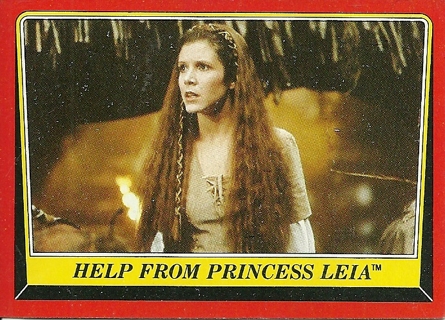