Are there two “Eric Nolans?”

There are a bunch, apparently.

For one, there indeed appears to be another poet by the name of Eric Nolan, whose work has been very popular online.

This isn’t me.  While I certainly wish this Eric continued success, his style is quite different from mine, and I would like to eliminate confusion among readers.  If I have authored a piece, it will bear the name “Eric Robert Nolan” or “Eric R. Nolan.”  The only exceptions should be the poem, “June, Washington, 1998,” which appeared in Dead Beats Literary Blog in December 2012, and the various appearances of “Liberty’s Gal” in 2002.  These were submitted before I was aware that I shared a name with another writer.

Also, if I’ve directed you here from websites where I write amateur movie and television reviews, you’ll note that that my name here is different.  Eric Robert Nolan is my real name, I write under noms de plume elsewhere.

Finally, I would also like to clarify that I am not the “Eric” pictured in the below poster, despite the obvious similarities in appearance and character that are often pointed out to me by friends.   (And we certainly hope this Eric is found.) 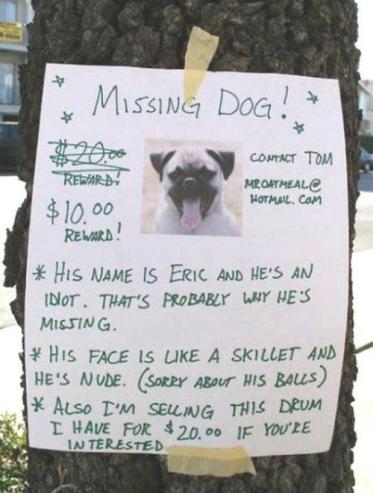 2 thoughts on “Are there two “Eric Nolans?””