I’m becoming concerned …  I keep seeing more troubling signs that I am getting older.

I can’t eat pizza and Ben & Jerry’s ice cream all day without feeling yucky.  And I have gone shopping and DELIBERATELY looked for vegetables.

I bitch inwardly about the quality of America’s public education system all the time.  (Don’t even get me started.)  I actually begin some of my (admittedly peculiar) inner monologues with the words, “There was a time in this country when …”  I have also lamented that “things were different 20 years ago.”

It recently dawned on me that my longstanding idolization of Kevin Smith may be waning …  last year’s “Tusk” just didn’t do it for me, and his recent appearance on “The Talking Dead” just seemed to feature too much childish sex humor.  I cringed.  (Lengthy analogies about oral sex aren’t THAT hilarious, people.  I suggest they have a 10-second half life.)  I still think that Smith is brilliant; I just think maybe his particular style of humor might better appeal to a guy in his 20’s.

In the Marvel movies’ upcoming “Civil War” storyline entries, I’m firmly on the side of Captain America, and not Iron Man.  Yeah, Tony Stark has the wit and the charm and the girls and the cash.  But Cap has character and good American values, with an emphasis on civil liberties.  Cap would never subject black people to an unreasonable search and seizure.  He wouldn’t enter a private home without a warrant.  And he would uphold a legal wall of separation between church and state.  Dunno about Tony.

Tori Amos is still cool, but she sounds NUTS in her interviews.

I played with a friend’s little girl on the swings the other day … and I actually got DIZZY after donning a swing myself, and trying to swing as high as her.  THAT was disconcerting.

My doctor told me to knock off all the sugar, and I am totally taking her seriously.

My buddy shared a picture today of the original Star Wars cast in 1977.  When I was a tot, I looked up to Luke Skywalker, Han Solo, and Princess Leia.  When I was in fifth grade, “Return of the Jedi” Leia was my heart’s desire.  (I need not even mention in which outfit.)  Today, 1977 Carrie Fisher looks like a sweet girl who could be my college sophomore daughter.  (Seriously, she looks YOUNG, people.)  Harrison Ford looks like that older kid in our hometown with the camaro, who I need to keep away from her.  Mark Hamill looks like that sweet kid down the block who wants a date with her, but won’t get one.

And tonight it has dawned on me that (I can’t believe I am saying this) Depeche Mode is getting maybe a little played out for me.  Oh God, I can’t believe I just typed that.  I still love MODE, I swear it!  I just think that after “Violator” has been in my playlist for two decades, it’s maybe time to retire the lesser songs like “World In My Eyes” and find some more new music.

But not “Policy of Truth.”  THAT SONG WILL LIVE FOREVER.  (And never again is what you swore the time before.) 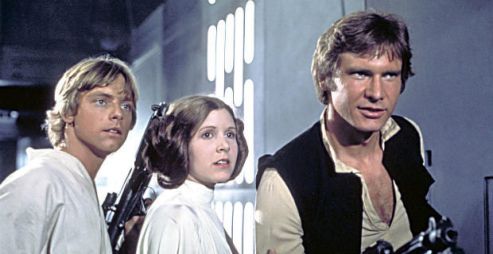