[THIS POST CONTAINS SPOILERS FOR THE MID-SEASON PREMIERE OF “THE WALKING DEAD,” AS WELL AS THE ORIGINAL COMIC BOOK SERIES.]

Okay, I am almost always wrong in my TV prognostications, but I can’t resist sharing my newest “Walking Dead” fan theory, as it seems like something nobody else has picked up on.

In the (quite outstanding) Season 6 mid-season premiere this past Sunday, Daryl Dixon receives a minor knife wound from one of Negan’s men.  It isn’t a dramatic moment; it occurs off screen.  It also isn’t a plot point, as it affects nothing else that occurs during the episode’s story.

Yet the writers do make an effort to show that it happened.  We see it below his left shoulder, Sasha talks to him about it, and we see him being treated by Denise at the show’s ending.  It seems to have been placed there for a reason.

Well … in the comics, something similar happens to certain minor characters.  After a pitched battle with Negan’s forces, they succumb to the zombie contagion after receiving minor wounds from knives or crossbow bolts.  (Daryl isn’t a character in the comics, but a bad guy wields a crossbow.)  They die, to the surprise of their friends and the doctor treating them.  That’s because Negan has instructed his men to contaminate all of their blunt or bladed weapons with tissue from the zombies.  (It’s a particularly nasty plot development in a pretty brutal comic series.)

Of course, I am nearly always wrong on these things.  And it could just be a red herring — it wasn’t too long ago that we saw Rick nursing a wounded hand throughout an episode or two, leading to fan speculation that he’d been bitten and infected. 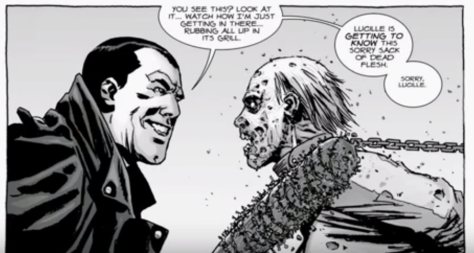 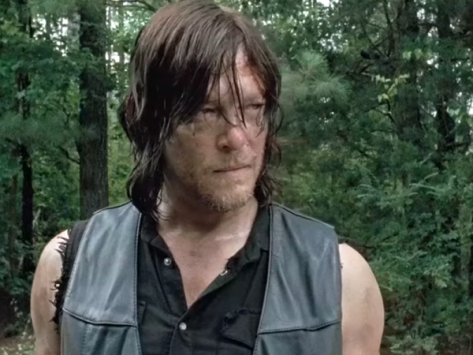