“Greta” (2018) has some of the ingredients of a fantastic thriller: an interesting story concept and the talents of both the wonderful Chloe Grace Moretz and the extraordinary Elizabeth Huppert.  It’s beautifully shot, too.   (Weird trivia — what you’re seeing in much of the film outside of the obvious establishing shots is Dublin, and not New York.  It turns out the Irish city can make a pretty plausible stand-in for the upscale neighborhoods of Brooklyn or Manhattan.)

Regrettably, those ingredients nevertheless combine into an average film; I’d rate this a 5 out of 10.  Until its final half hour or so (when there are a few nice moments, thanks to Huppert), it’s far too slow in its execution.  The tone of the movie feels somehow off, too.  The city is bright and beautiful.  Moretz’ character and her roommate (well played by Maika Monroe) feel too strong and capable to become truly imperiled.  Worst of all, the titular Greta comes across during most of the movie as a vague and ineffectual threat.  (There is a sequence in which she harasses Moretz by simply standing outside her workplace and staring.  It’s unintentionally funny — you’ll know what I mean if you see the movie.)

Don’t get me wrong — this isn’t a truly bad film, only a mediocre one.  If the trailer suggests you might like it, it’s worth the price of a Redbox rental to find out. 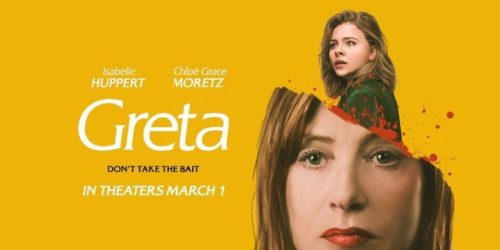