I remember being fairly unimpressed with “Squirm” (1976) as a kid, but maybe that’s because I saw it on television in the 1980’s.  (It might have been a bowdlerized version deemed safe for broadcast.)  The movie was just a disposable, lower-budget 70’s monster flick with a what seemed like a hastily conceived plot device — some downed electrical lines had the unlikely effect of turning ordinary earthworms into wriggling man-eaters that attacked en masse.

“Squirm” evidently scared at least some people, though.  A pal of mine on Facebook said it really got under her skin when she was a girl.  She couldn’t eat spaghetti for weeks after seeing this movie.

Hey, if the film wasn’t exactly terrifying, you’ve got to admit that its plethora of international marketing posters was damned artistic.  Check ’em out below.  I believe they’re what today’s kids would describe as “metal AF.”  That second one has some genuinely discomfiting Freudian undercurrents, but still. 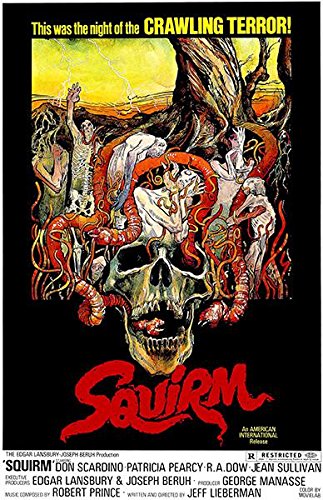