I was surprised when I recently discovered that “The Swarm” (1978) was a feature film; I remembered it as a made-for-television movie from my childhood.  (After its theatrical release, it debuted on NBC with a hell of a lot of fanfare in February 1980.)  I was also surprised to read that it was both a critical and a commercial flop, and is often named as one of the worst films ever made.  I was in the second grade at the time, and — let me assure you — this was THE movie the kids in school talked about.  We were in awe of it.

The people behind “The Swarm” had high hopes for it in 1978.  The internet informs me that it was based on a best-seller by famed novelist Arthur Herzog. And it was helmed by director Irwin Allen, who gave us two classic 70’s film adaptations of disaster novels — “The Poseidon Adventure” in 1972, and “The Towering Inferno” in 1974.  (Those were a pretty big deal back in the day.)  And just look at the cast named in the trailer below.  It’s like a who’s who of 1970’s cinema.  Yet it all apparently just didn’t pan out … contrary to my memories of second grade, “The Swarm” went down in pop culture history as a train wreck.

Check out the bee-proof suits worn by the guys with the flamethrowers.  Talk about an excellent G.I. Joe toy that was never made.  (Of course we had “Blowtorch,” but he was 80’s rad, and these guys in white are 70’s kitsch.) 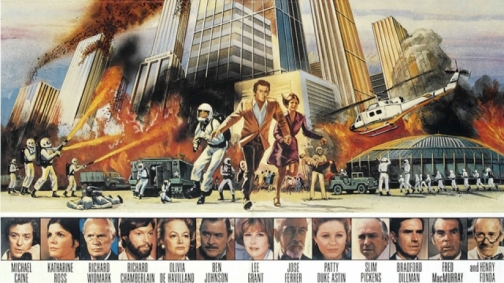