As I’ve mentioned before on this blog,  I will never stop loving Steven Spielberg’s 2005 take on H.G. Wells’ “War of the Worlds.”  It was a damned decent science fiction epic, the special effects were fabulous, and it’s actually pretty scary upon its first viewing.  The movie successfully channeled post-9/11 anxieties without exploiting them, and Spielberg characteristically humanized the story’s apocalypse by framing it through the eyes of a realistic, relatable modern family.  (The terror of the genocidal monsters is a little ironic, too … when I was a kid, Spielberg was known for the wondrous aliens of 1977’s “Close Encounters of the Third Kind” and 1982’s “E.T. — The Extra Terrestrial.”)

Say what you want about Tom Cruise … I think he’s a decent actor, and he’s led some really terrific science fiction films.  Dakota Fanning was fantastic child actor here, and Tim Robbins was predictably brilliant (even if his story arc, in my opinion, was largely unnecessary and too depressing).

This was a great flick.

It’s easy for me to understand why “Close Encounters of the Third Kind” is a classic.  This movie held two big surprises for me, along with a lot of other things to admire.

First were the special effects.  This movie was made in 1977?!  That’s a little hard for me to believe.  The effects here seemed at least as good as the original (and not digitally remastered) “Star Wars,” which came out the same year.  Like Star Wars, it could only have used models and forced perspective.   Am I crazy if I think one or two of the effects here might have even been better?  There are several scenes where the smaller (scout?) spacecraft appear to revolve 360 degrees in midair, with remarkable depth and the appearance of a three-dimensional object.    Isn’t this at least as good as many sequences In Star Wars, with its more static shots of ships seen from only one angle?  (In retrospect, I don’t know if the version I saw of “Close Encounters” was itself remastered or “improved.”)

Second … was my favorite TV show of all time a rip-off of a 1970’s Steven Spielberg movie?!  I couldn’t believe how directly the 1990’s’ “The X-Files” seemed inspired by this – right down to an international government cover-up.  “The X-Files,” of course, was a horror-thriller series, while this is a family film – which did rob it of a lot of tension.  How much suspense can we really feel if we know that this material is suitable for all ages?  Indeed, the worst thing to happen to any of the major characters we follow is that he falls asleep from knockout gas.

To make things even more fun, I swear I saw a cameo by (an extremely young) Lance Henriksen, who had a guest appearance on “The X-Files.”  (He’s one of the scientists at the end.)

There was more about this movie to like a hell of a lot too.  Richard Dreyfuss is a damn good actor.  So, too, is Terri Garr – despite dialogue that makes her sound like a hysterical shrew.  (Cary Guffey was also a great child actor.)

The script is smart, with characters sounding like we’d expect them to sound.  Scientists are human beings who get excited over amazing discoveries, instead of being amoral automatons and devices for exposition.  The kids here sound and behave like KIDS, a lot like the characters behaved in the later “E.T.: The Extraterrestrial.”  And the film did a great job of juxtaposing Dreyfuss’ everyman plight with larger global events witnessed by a range of other characters.

Plus, “Close Encounters” was just plain fun.  I’m not big into family movies, but even I’ve got to admit, Spielberg really does project a sense of wonder here.  This seems like a great film with which to get a pre-teen interested in science fiction.

I had a few quibbles, but they were all forgivable. 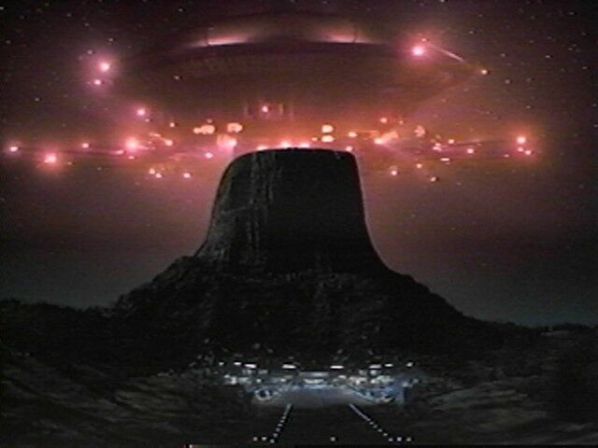