Here’s another happy Christmas memory — the Find Your Fate Adventure  books featuring Indiana Jones.  I was happy indeed when Santa brought these.  They were first published by Ballantine Books in 1984 and 1985, and they were basically Choose Your Own Adventure books in which you teamed up with Indy in the same type of archeological adventure you saw in the movies or in his comic book series.

Like most series of this type, they were penned by different authors and tended to vary in quality.  The second book, “Indiana Jones and the Lost Treasure of Sheba,” was authored by Rose Estes, who wrote some terrific title in the Endless Quest series, TSR’s own excellent take on the format in the Dungeons & Dragons genre.  There also were several written by R.L. Stine, they were reprinted in the 90’s following his popularity with his Goosebumps series.

I had the first four that you see below.  I seem to remember one being kinda bad, but I’m not sure I remember which.  It might have been Andrew Helfer’s “Indiana Jones and the Cup of the Vampire.”  (It was whichever book portrayed the reader as Indiana Jones’ cousin, who he repeatedly addressed as “Cuz.”)  The other books were damned great fun, though.  I do remember Estes’ “Lost Treasure of Sheba” being quite good.

I never owned the fifth book you see below, and never read it.  I can’t resist including it here, though, simply because of its title — “Indiana Jones and the Ape Slaves of Howling Island.”  If that isn’t the most interesting title in the history of western literature, I don’t know what is.  I’m 45 years old, and I would snap that up right off the bookstore shelf if I saw it.  Somebody should have gotten a raise for that one. 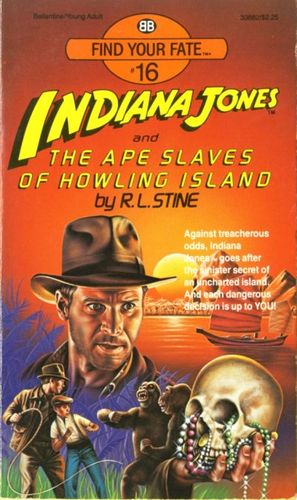