NBC’s “Knight Rider” might be the granddaddy of all 1980’s high-tech super-vehicle shows — if I had to guess which one was the most popular or most fondly remembered, this would be it.  (I suppose the other leading contender would be “Airwolf,” which we talked about a couple of months ago — but that was aimed at an older audience.)

“Knight Rider” was cheesy.  But most 80’s action shows were cheesy, and I still remember it as being decent enough.  Lord knows I and Mikey Wagner, the kid on the next block, were fascinated by it.

As anyone who remembers this show can attest, there is a key character that isn’t even hinted at in the intro below.  The car was sentient.  His name was K.I.T.T. (Knight Industries Two Thousand), and he was an artificial intelligence who actually who had a hell of a lot of personality.  K.I.T.T. was a super-intelligent, talking, futuristic, sleek, black sportscar, and he was an incongruous damned hero to us kids.

The other star was Davis Hasselhoff as Michael Knight.  We looked up to him too.  Hasselhoff, of course, is now better known for his subsequent starring role as a moronic lifeguard on the categorically awful “Baywatch” (1989 – 2001).  I remember seeing snippets of “Baywatch” in the 1990’s — it was constantly playing in the newsroom at my first job as a cub reporter.  (The guys there loved it.)  I remember being disappointed that one of my childhood heroes had somehow morphed into a male bimbo on the most saccharine and brainless TV show I had ever seen.  Hey, “Knight Rider” was a show for kids … but it was goddam “Masterpiece Theater” when compared with “Baywatch.”

Weird trivia — the voice actor for K.I.T.T. was none other than William Daniels, who also gave a stellar performance as John Adams in 1972’s film adaptation of Broadway’s “1776.”  It’s so weird seeing that movie and hearing the voice of K.I.T.T. come out of Adams’ mouth.

What you see below was the holy grail for little boys in 1980 — Wrist Racers.  Although Knickerbocker produced versions of these for TV shows like “The Dukes of Hazzard,” “Knight Rider” and “The A-Team,” I had the plain shiny red version.

I got it for my birthday one year, I think.  And man did I love it like Gollum loved the goddam Ring.  The concept for the toy is a little weird … it was just a windup toy car that you wore on your wrist like a cheap, bizarre, oversized bauble of a wristwatch.  Because God forbid you went through the trouble of slipping a tiny toy car into your pocket.

You wound it up manually as it was in its clear plastic housing.  And when you wanted to launch it across the floor, you held your forearm down to the floor with that little retractable red car ramp deployed.  Then you pressed a button and the thing would shoot across any smooth surface — delightfully fast.  (If you think about it, this toy’s design was a slightly reminiscent of the Evel Knievel wind-up motorcycle toys of the 1970’s.)  I remember shooting it under my family’s dining room table (the same place I loved to hurl those tiny period “bouncey balls”), so that it ricocheted off of all the table and chair legs.

And very soon after I got it, I lost the damned thing.  I was playing hide and seek in a vast cornfield (yes, rural New York indeed has cornfields, people), and I f@#&ing lost it.  The clear plastic housing had sprung open, and I lost that damn shiny red car.  Words cannot describe the remorse I felt.  I still remember looking down to see the empty housing on my wrist, like a missing limb, and gaping dumbfounded at my discovery.  And that car was absolutely impossible to find in acres of high corn (even though I tearfully attempted that Sisyphean task anyway).

I might one day find and order one of these off of eBay, just to achieve closure for that event in my childhood. I could only sit through an hour of Piranha 3DD (2012), despite a sheer cornucopia of bosoms. THAT’S HOW BAD A MOVIE THIS IS.

I’d give it a 0 out of 10, and I actually liked its predecessor, which I thought was a fun B-movie and an homage to 1970’s gimmick monster movies. This … this was just a failed horror movie, in which the filmmakers tried to compensate with a couple of hundred half nude 20-somethings. FAIL.

The movie’s most redeeming quality (in the first hour that I watched) is the presence of David Hasselhoff. He seems to be a genuinely funny guy who is down-to-earth enough to poke fun of himself a little. I think that’s pretty cool. And, yes, per his query in the movie, there actually ARE some people who remember “Knight Rider.” 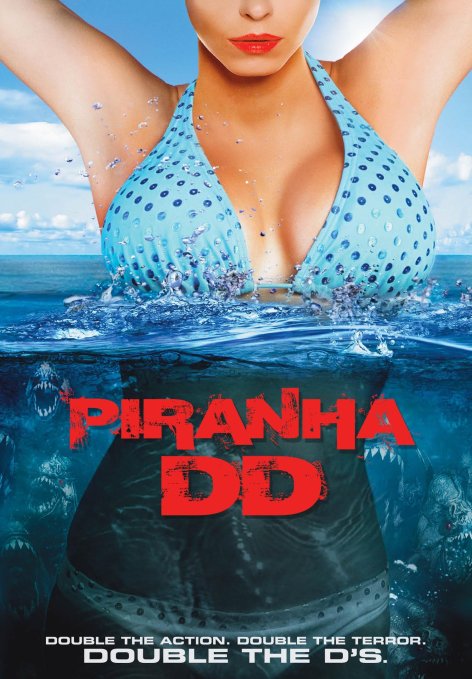