It wasn’t even the various “Planet of the Apes” films, the Godzilla films, or the original “War of the Worlds” movie.

This comic book, which I somehow got a hold of at around age eight or nine, contained a story called “I’ll Remember You Yesterday.”  It was a time travel story in which an explorer visits the future to find humanity destroyed and the planet colonized by aliens.  Using clues from the future, he returns to the present to find and destroy the original alien colony, thus eliminating their beachhead and saving the human race.  He died a heroic death, causing an avalanche that buried both him and the alien vanguard.

Ignore the content on the cover, even if it is quite well drawn.  That story was “Alligator Alley,” and it was the lead story in the issue.  It was about … hippies, and … sex, and people turning into alligators.

Despite those rather intriguing plot elements, it totally fell flat with this nine-year-old.  It was too chatty, and it had a confusing climax with some sort of humanoid … alligator king.  Breasts were everywhere.  At least every other panel featured breasts.  I’m pretty sure it should have been entitled “Breast Alley.”  But I was nine, so … heroically machine-gunning aliens was far more entertaining for me.  “You’ll never conquer Earth!!  NEVER!!!”

Despite the loads of comics that I still own, this one has been lost to the years.

Someday when I am wealthy, I will have a framed copy of the story panels in my parlor.  (I will have a parlor, people.) 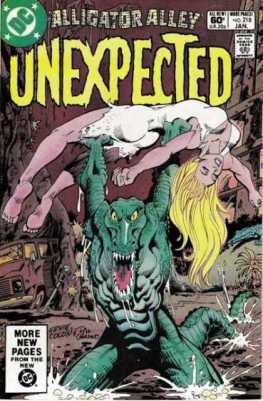