“When the Wind Blows” is a decent 1986 British animated film that follows an elderly couple trying in vain to survive a nuclear war.  It was adapted from a graphic novel by Raymond Briggs, and the two characters are modeled after Briggs’ parents – which must have made this a challenging project to write, given the dark, tragic nature of the material. I’ve had a few friends recommend this – and I suspect it might have a bit of a cult following because it also features music by none other than Roger Waters, David Bowie and Genesis.

This movie employs irony on two levels. One, the animation style is deceptively child-like, and eerily contrasts a brutal story about two people who are woefully unprepared for the aftermath of a nuclear holocaust. It’s a mixture of traditional animation and stop-motion photography, with departures every now and again for really thematic montages, which make great use of fantastic imagery.

Two, the story focuses on the husband’s naive reliance upon government-issue pamphlets, which are entirely inadequate to help them. The feckless couple also romanticizes the British experience during World War II’s “The Blitz,” and wrongfully expects their experience with the new world war will parallel that.

I thought it was well done. I’m not sure the material warranted an hour-and-a-half running time, however, I think this could have been covered in 40 minutes to an hour. The caricaturized voices and vocal optimism also made the characters slightly annoying after about an hour. 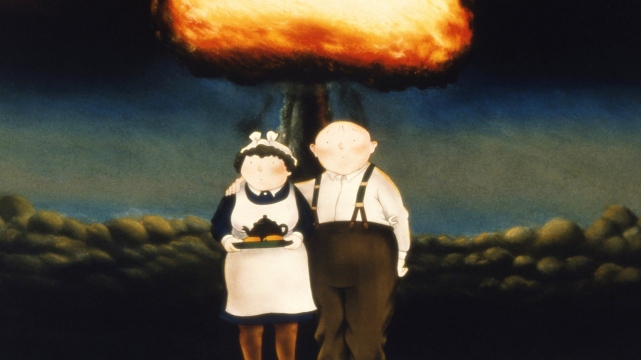