John Carpenter’s 1982 tour-de-force, “The Thing,” is arguably the best horror movie of the decade.  It paid little attention to the movie it ostensibly remakes, the standard, boilerplate, flying-saucer Saturday-matinee of “The Thing From Another World” (1951). It presumably paid greater attention to its real and far darker source material, “Who Goes There?,” John W. Campbell Jr.’s 1938 horror-sci-fi novella.

One of the things the movie’s fans still debate heatedly is its bleak ending — I think it goes beyond ambiguous to downright mysterious.  Viewers actually are given no certainty whatsoever about who or what are actually pictured onscreen in the film’s Antarctic setting, after a fiery climax for this gory, special-effects-heavy actioner.  (Only people who have seen the film know what I am talking about.)

My own interpretation is a little less popular than the others you hear about.  To conceal spoilers, I’m sharing it after the poster image below.  [IF YOU HAVE NOT SEEN THE MOVIE, STOP READING NOW!] 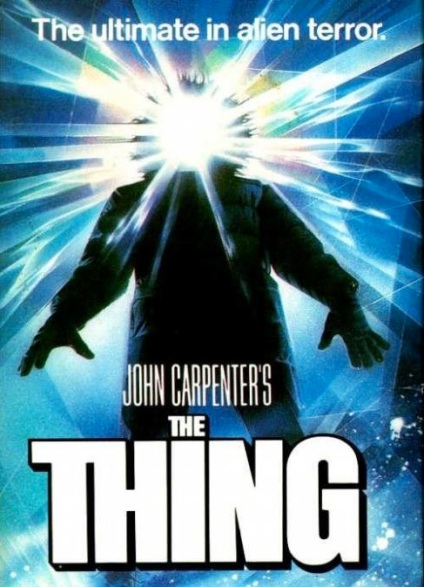 Okay.  Fires and explosions have destroyed the Antarctic research station.  We see who are presumably MacReady and Childs, exhausted from the climactic battle, and the only two people left.

But are both of them people?  Each “man” voices his suspicion that the other is an alien replacement, perfectly masquerading as its prey, as is the monster’s modus operandi.

Many people opine that Childs has been thingified, and hopes to attack, digest and then “imitate” MacReady.  Many other fans say it is MacReady who has been replaced, and wants to predate upon Childs.  The supporters of both theories point to the fact that MacReady passes a liquor bottle to Childs as a clue that supports their position.  I’ve read in several places that John Carpenter has gone on record as saying that he himself doesn’t know who is human and who is not.  Soooo … there is no canon.

To this day, I still stick with the impression I got when I first saw this film as a teenager — MacReady and Childs are BOTH human.  There are a few reasons for this.  Granted, they are completely subjective.

First, if one of the men has been thingified, then it would seem to be that the movie lacks an ending.  Our entire story so far has been expertly constructed by Carpenter and screenwriter Bill Lancaster.  This story depicts inferences drawn by every character about who can and cannot be trusted — followed by horrible monster attacks, the success of which depends on the accuracy of the humans’ inferences.  Ending the movie with either of its last characters thingified, but unidentified, really seems like an unresolved plot point.

Second, would even a movie as dark as “The Thing” sadden viewers by making the sublimely likable MacReady into a grisly victim of the alien?  Yes, this is an extremely dark film.  And I know this is wishful thinking on my part.  But the idea that the MacReady we see is just a thingified imitation is just too depressing for me.  So I refuse to go with it.

Third, the idea that they are both human give’s the story’s coda a great sense of tragic irony.  Our antiheroes have just succeeded in destroying a global alien invader that was incredibly hard to kill  —  an otherworldly threat as unique as it was terrifying.  Now they are (probably) consigned to simply die of exposure — a truly prosaic threat.  (I say “probably” because I am still holding on to the slim hope that at least MacReady will somehow survive.)

But your mileage may vary.  Again, there really is no canon, given Carpenter’s statement.  So … whatever conclusion each viewer draws for him- or herself is … correct.