“Deliver Us From Evil” (2014) pleasantly surprised me by being a pretty decent horror movie; I’d give it an 8 out of 10.

I expected a predictable melodrama between its two primary protagonists — the hardened, intractably “close-minded” cop and the wise young priest.  This, I thought, would upstage a thin, generic, supernatural backstory.

Well … there was some of that expected character interaction, but I admit that it was done pretty well.  And the old fashioned scares served up here make this an above average horror movie.

I say “old fashioned” because this seemed to channel the demonic possession classics that defined this horror movie sub-genre, for me, anyway — “The Exorcist” (1973) and “The Exorcist III” (1990).  It has an expansive story that begins in a nicely surprising battle scene in Iraq, then shifts its focus to several chilling violent crimes in New York City.  Then it effectively blends a horror story with a police thriller.  And the story is detailed, with some thought put into the demon’s modus operandi and choice of victims, as well as the their investigation by streetwise New York City cops.  A straight horror-thriller like this is a nice contrast to recent well made supernatural horror films like last year’s “The Babadook” or “It Follows,” which were ambiguous and heavily thematic, personal stories with virtually no exposition.

Eric Bana and Edgar Ramirez were both terrific; even they might have been upstaged by Joel McHale in a supporting role as Bana’s foul mouthed but loyal anti-hero partner. I was rooting for him more than the thinly drawn hero scripted for Bana. (Can any NYC cops really wield a knife like that?  If so, that’s totally badass.)  McHale is damn good — I’ll be looking for him in his regular role in the upcoming revival of “The X Files.”  If you were an NYC cop, wouldn’t you want a partner like that?  Seriously … that dude is BADASS.

Regrettably, this movie’s thought and creativity do seem to lose steam toward the end.  Certain scares and images were done wonderfully.  The scenes inside the asylum were great, for example, especially one shot that made me think of the Batman mythos’ Arkham Asylum.  Others fell flat.  Our Big Bad, when finally revealed in full, is just a generic ugly dude in drab whiteface.  And a sequence involving a piano is shot with little visual flair.

The most frightening subplot of all involves a troubled girl in her bedroom; it’s cut short and rendered irrelevant in order to move the plot forward.  And the finale features an exorcism that recycles mostly old tropes from the sub-genre.

Hey … this was still a good movie, though.  It certainly was better than I thought it would be.  I’d cheerfully recommend it.

Oh!  One more thing — this is supposedly based on a true story.  Scott Derrickson’s interesting screenplay derives from the 2001 book, “Beware The Night,” by retired NYC police officer Ralph Sarchie (Bana’s character).  I wonder what evidence anyone has gathered to either support or debunk the story here. 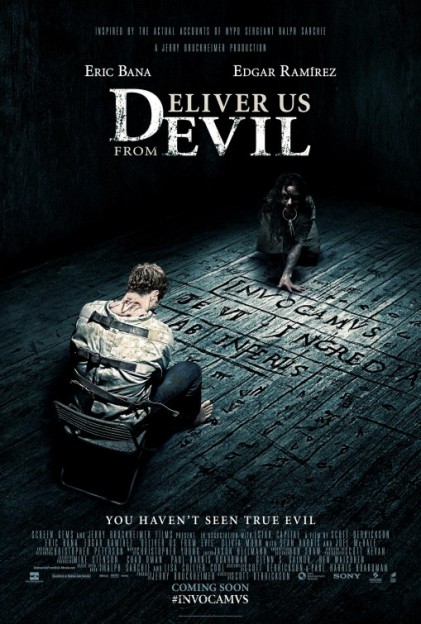