Here’s another bizarre relic of Boys’ Life magazine in the 1980’s — an ad for what was apparently a $4.95 do-it-yourself hovercraft.  (Kids needed to read that entire ad to understand that what this company was selling you was not the “AIR CAR” itself, or even its parts, but only “plans and photos.”)

A pal of mine in the Cub Scouts had his heart set on this, but  I wisely cautioned him that you couldn’t always trust advertisers.  (I’d learned my own lesson a couple of years prior from the duplicitous marketers of “Sea Monkeys.”)  You’ve gotta read the whole thing through, I told him.  Pretend that you’re dealing with the least trustworthy kid on the school bus.  It was one of those truly rare moments in my life when I counseled circumspection to others instead of vice versa.

He was pretty zealous in his desire for this thing.  For some reason, he really wanted to take it out over the Long Island Sound (to … Connecticut, presumably?)  I’m still not sure why he didn’t want a jet ski. We indeed had those in the 80’s.  Oh, well.  As dreams go, it wasn’t the worst that a kid could have.

He never wound up sending away for it.  I’m not sure if that’s because I talked him out of it or not.

But here’s the stunning O’Henry-style postscript — I’ve read a few Reddit and Twitter posts from men in their 40’s who also remember this Boys Life ad, and who actually sent away for the plans.  A couple of them claim that they successfully built this device, and that the damned thing actually worked.  (Cue the theme music for Christopher Nolan’s 2006 “The Prestige.”)  It certainly couldn’t hold 100 pounds, they qualified, but it technically still worked.

I guess if I ever run into my old friend from the Cub Scouts after 40 years, I owe him a hovercraft. 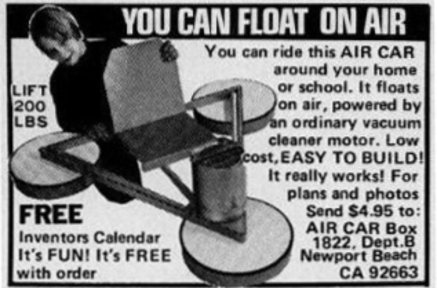