My Johnson Smith Company catalog has arrived!!  This is the first time I’ve gotten one in the mail in … 30 years?  35?  (I ordered it on a lark when I wrote that Throwback Thursday post a few weeks ago.)

What a trip!  The mail order company has definitely changed somewhat.  The catalog is far fewer pages now; as you can gather from the picture below, it’s closer in size to those free circulars that you can pick up outside the supermarket.

I was disappointed to see that there are fewer pranks and novelties aimed at kids.  (Whoopee cushions and X-Ray Specs, for example, are nowhere to be found.)  There are far more wares aimed at adults — they include a surprising number of sex toys for both men and women.  (The company adamantly asserts in bold red letters that these items are Non-returnable.)  There is an abundance of pro-Trump merchandise too — check out that “Donald Trump Life and Times Coin & Trading Cards Collection” in the second photo.

Ah, well.  You can still find some cool stuff.  Those “Alien” and “Predator” … “Body Knockers(?)” look pretty neat.  And that Mego “Nosferatu” doll is goddam spectacular.  (I had no idea that the Mego Corporation  was still making toys.)  I don’t know whether its eyes glow in the dark, but I really, really want to believe that they do. 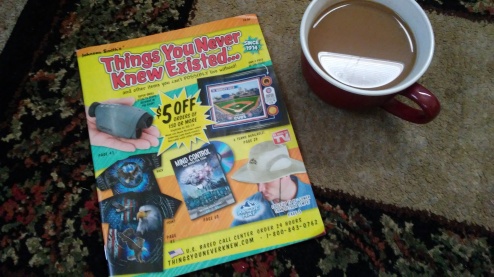