“Jack Ryan: Shadow Recruit” (2014) is easily the least of the Tom Clancy adaptations.  But that shouldn’t be enough to indict the film; the other film treatments of the author’s books have all been roundly excellent.  (Okay, 2002’s often-reviled “The Sum of All Fears” might be an exception, but I still like that flick even if I’m in the minority.)  I’d rate this outing a 6 out of 10.

It isn’t a bad movie … it’s just an average, generally undistinguished boilerplate spy thriller that seems half-heartedly rewritten as a reboot of the Clancy films.  Screenwriters Adam Cozad and David Koepp pay cursory attention to the title character’s background, and a key plot development from the books that I will not spoil here.  But the film utterly lacks the mood, detail or methodical plotting of anything Clancy created.

It’s all very generic stuff.   We’ve got a generic, telegenic, twenty-something action hero (Chris Pine), his generic hot girlfriend (Keira Knightley), the expected Russian bad guy (Kenneth Branagh) and a by-the-numbers climax — including the last-second requirement to divert a bomb from its target.  Rounding it all out is Kevin Costner, the most generic good guy ever to behave predictably on screen — he characteristically projects the expected, wholesome gravitas.  Even this film’s title is generic — it sounds like the name a marketing department would come up with for an entry in a video-game series.

There are plot elements that are painfully implausible, even by spy-movie standards.  Jack Ryan’s new girlfriend, for example, surprises him by arriving in Russia in a flourish of quirky-girlfriend spontaneity, only to discover his secret career and then be fully enlisted in a spy operation.  Branagh doubles as the movie’s director; his work here is surprisingly problematic.  This is yet another movie in which important action sequences are barely comprehensible because of frequent, rapid cuts.

Oh, well.  It certainly isn’t all bad.  There isn’t a single bad actor in the film, for example.  If I don’t like Branagh’s directing, I love his acting.  The guy is magnetic — he alternately and convincingly projects menace and charisma to perfection.  Alec Utgoff shines too, in a small role as a soft-spoken, ironically disarming Russian assassin.

People tend to either love or hate Costner.  I like him quite a bit.  No, he doesn’t always demonstrate an incredible range.  But his acting is competent and he’s likable and consistently convincing.  He’s the actor equivalent of that old American sedan that isn’t flashy but always starts reliably when you need it to get you to work.

Hey, you might like this movie far more than I did.  I was an obsessive fan of the books, so my standards may be a bit high where they are adapted to the screen.  Your mileage may vary. 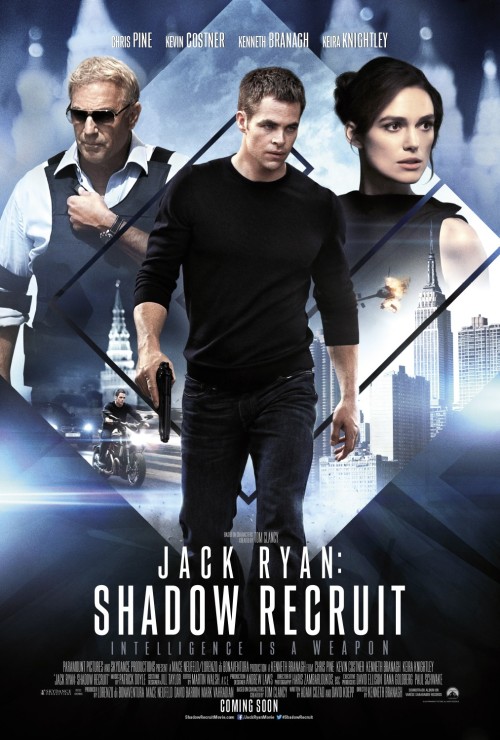