Like the two films preceding it, “War for the Planet of the Apes” (2017) is an intelligent, well rounded science fiction thriller.  The newest “Apes” series has been leagues ahead of the campy late-1960’s original films, and of course Tim Burton’s bizarre 2001 remake.

There is more going on here than a simple “apes vs. humans” tale.  Nor does it engage in simplistic moralizing, in which the innocent animals must escape from their human oppressors.  There’s a hell of a lot of moral complexity — something noted by the many positive reviews for the film.  One of the things that I liked the most was a compelling new surprise plot element, even though it approaches deus ex machina territory.  I won’t spoil it here, but it’s bleak, it’s frightening, and it makes you think.  Given the new information one character explains to another … it’s hard to say who is the bad guy, isn’t it?  How this plot element plays out is damned effective too.

This movie also superbly renders non-human characters — both in terms of its smart script and its special effects (a combination of both CGI and human actors).  I was greatly impressed at the detailed and lifelike facial expressions.

The action sequences were well executed, too, and the film had an epic feel.  (Although this would be a decent conclusion to a trilogy, filmmakers Matt Reeves and Martin Bomback have gone on record stating they wouldn’t be averse to future sequels.)

Still, I must confess that my attention sometimes wandered.  I think the pacing was a bit off.  It also didn’t help much that the conclusion of the final action set piece was spoiled by one of the film’s trailers.  (What the hell were they thinking?  Who makes these decisions?  Was there any backlash from fans who didn’t want advance knowledge of the film’s ending?)

Although this was an exceptionally well developed film, I just can’t give an unusually high rating to a movie that didn’t always hold my interest.  I believe, therefore, that I’d rate this an 8 out of 10. 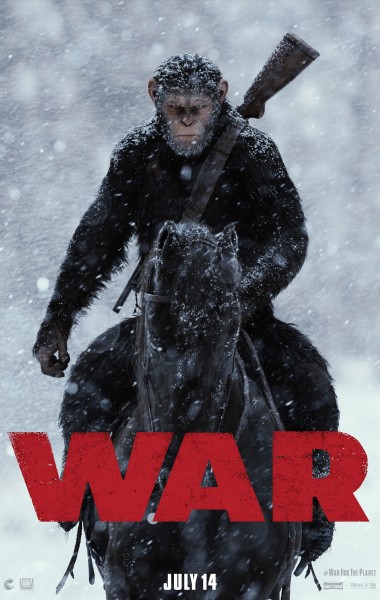