The Internet is a fine thing.  Below is the complete rendition of Irma Thomas’ “Anyone Who Knows What Love is,” performed by the character of Abi in “Black Mirror’s” second episode of Season 1.  It’s a beautiful song, and a real highlight of the episode, “Fifteen Million Merits.”  The talented actress here is Jessica Brown Findlay.

The song actually pops up in another episode of “Black Mirror.”  (I am new to the show, but I am enjoying it chronologically with a dear friend of mine who has already seen all the episodes.)  Season 2’s tour de force, “White Christmas,” has one character singing the song in a karaoke bar.  My friend pointed out that we briefly glimpse an in-universe TV show in the very same episode, in which dancers are seen on a stage that looks like the one in “Fifteen Million Merits.”

Do all (or some) of “Black Mirror’s” episodes take place in the same fictional universe?  It kinda feels plausible.  The variations of optically linked computers in different episodes, for example, seem to dovetail pretty nicely.

“Black Mirror” seems to me to be  the best science fiction show on television; I’d rate Season 2 (2013) a 9 out of 10.  (I’m never quite certain whether to group British shows by “season” or by “series,” as they do.  I’m also a little uncertain why the fourth and final episode here, “White Christmas,” is included in Season 2, as it aired nearly two years later as a 2014 holiday special.)

I commented to a friend of mine after seeing “White Christmas” the other night that the show was “brave” — it just isn’t afraid to alienate mainstream audiences by being too dark.  Not all of “Black Mirror’s”  episodes have “twists,” but they typically have an unexpected plot development, and their outcomes and implications are arguably depressing.

It’s just such a damned good show, though, in terms of its writing and acting.  My friend told me she wasn’t aware of anyone who had seen it and disliked it.

“White Christmas,” for example, was one of the best hours of science fiction television I’ve ever seen.  It consists of three blackly tragic vignettes seamlessly woven withing a wraparound story, and it employs a sci-fi plot device that is mind-bending and brutal.  I believe this is the first time I’ve seen its lead actor, Jon Hamm, and I was extremely impressed with his performance.

My only quibbles with the program are extremely minor.  As with the first season, I think that not every episode truly requires a 44-minute running length.  I thought two episodes  (“Be Right Back” and “The Waldo Moment”) seemed like they could have been tightened up into one, maybe with tighter writing allowing for shorter segments.

I’ve noticed another minor relative weakness with “Black Mirror” in general as well — the show does not always present the viewer with likable protagonists.  Occasionally, the various characters we’re asked to identify with are either slightly off-putting or even annoying.  Again, “Be Right Back” and “The Waldo Moment” spring to mind.  This wasn’t enough to greatly affect my enjoyment of the episodes, though.

What an incredible show. 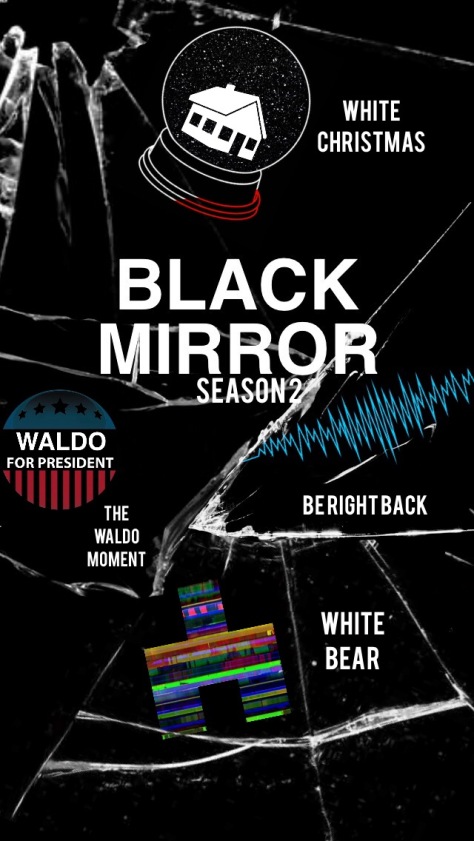