No, I’m not talking about the Marvel Comics adaptation of “Raiders of the Lost Ark” (1981); I’ve written about that separately here at the blog.  This was a regular ongoing comic book title between January 1983 and March 1986.

And every issue of it was a mind-boggling pleasure for a fourth grader whose favorite hero was Indiana Jones.  I remember issues one and two waiting for me after school one day, displayed upright on the kitchen table.  My Dad had picked them up for me.  (He was constantly trying to help me with a problem that had plagued my childhood — I simply never owned enough comic books.)  These were a departure from the “Sgt. Rock” comics that my father usually bought for me, but damn if they weren’t a thousand times better.  I was stunned by the very concept of them.  “Raiders” was a … COMIC BOOK now!?

Of course the plots were derivative of the film.  Ninety percent of the places Indy went, an ancient artifact or temple held a terrifying secret, often unleashing a power that could control or destroy the world.  And only Indy’s superior knowledge of archeology — or just his sheer pluck — would allow him to employ it to vanquish the bad guys.  [Spoiler warning for “Raiders,” by the way.]  The writing was damn good, as far as I can remember.  And we got to see Marion, Sallah, Marcus Brody and even Captain Katanga again.

You see that cover where Indy is on the wing of a plane?  That bad guy just might be one of the Hovitos … I can’t remember well enough to be sure.  At one point this adversary steals Indy’s whip and tries to use it against him.  (It doesn’t turn out well for him.)  In fact …I think it was the scene you see on the cover.  I’m not sure why the artist depicted a grappling hook instead.  I remember the villain’s line being, “It would be fitting for such a man to die by the sting of his own weapon.”  I have no idea why I remember that dialogue after 35 years (and little else about the issue).  The mind is a funny thing.

All of the covers were damn cool.  I happen to love that final one  you see at the bottom.  That was Indy’s adventure at Stonehenge.  But the first two covers you see are the ones that I would eventually like to get framed, someday after fame brings me opulence — those were the ones waiting for me on the kitchen table that day in 1981. 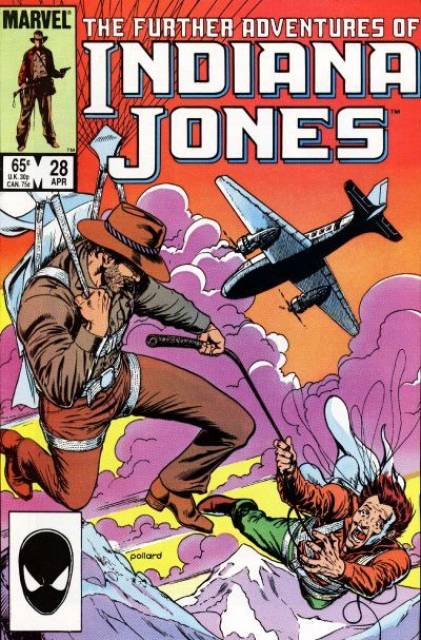 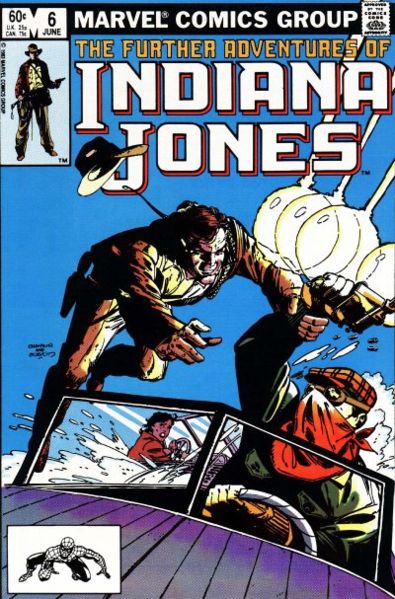