I had genuine, serious, grownup responsibilities to meet yesterday.

And I was up sleepless at 2:21 AM the prior evening pondering what would happen if a group of Terminators fought John Carpenter’s “The Thing.”

And I’ve got two more for you:

What would happen if The Blob fought The Thing? I suppose it all boils down to which has the fastest, most successful cellular-level method of attack.  What about the baddie from Dean Koontz’ “Phantoms?” 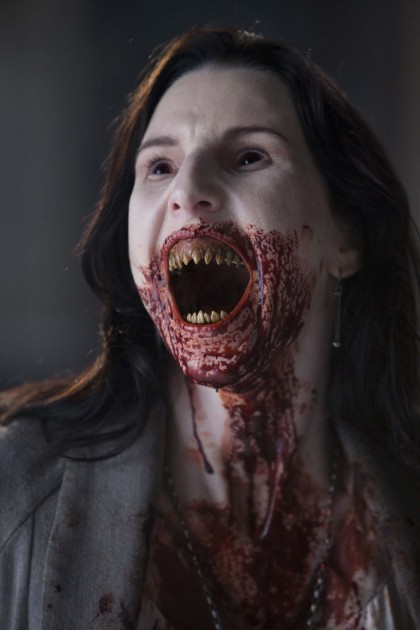 I revisited “Phantoms” (1998) the other night, and I thought I’d just speak up briefly here on its behalf.  For one thing, I really chatted up Dean Koontz’ 1983 source novel here at the blog not too long ago.  And for another, this critically and popularly panned movie is one that I happened to like.

Ben Affleck actually wasn’t “‘the bomb’ in “Phantoms.'”  (Referring to something as “the bomb” was, at one time, a high compliment in American slang.)  He mostly phoned it in, and even seriously flubbed a scene or two.  (Hey, I actually like the guy a lot, and I’m willing to give him a chance as the next Batman.)  The headline above is actually some particularly meta humor from another character played by Affleck, in Kevin Smith’s “Jay and Silent Bob Strike Back” (2001).  Affleck was poking fun at himself a little here, along with his fellow denizens of Smith’s “View Askewniverse.”

Roger Ebert dismissed “Phantoms” as “another one of those Gotcha! thrillers in which loathsome slimy creatures leap out of drain pipes and sewers and ingest supporting actors, while the stars pump bullets into them.”  You can read his entire review right here:

No, “Phantoms” isn’t classic sci-fi-horror.  It’s sometimes pretty thin stuff on a number of levels … but primarily the levels of acting and screenwriting.

But, dammit, I still liked this movie a lot.  If you’re a fan of the book (I’ve suggested it’s Koontz’ best), you’ll be happy to discover that it indeed conscientiously sticks to its wicked-cool source material.  We see a small Colorado mountain town where all the inhabitants have vanished; a clutch of wayward visitors then try to escape the same grisly, mysterious fate as its residents.)

The book’s central plot device is a nicely conceived and executed idea for a monster, with some effectively creepy historical and scientific context.  (I can still remember a colonial victim’s warning, which is referenced in the book, but not the movie: “It has no shape; it has every shape.”)

Despite its clunky script, the film brings us a story that is pretty intelligent — thanks to retaining so many elements of the novel.  This is a thinking man’s monster movie — like somebody rewrote “Beware the Blob” (1972), but put a hell of a lot of smarts and creativity into it.  We’ve got two groups of bright people who fight back against “the Ancient Enemy,” and their actions and strategies generally make sense.

Also … Liev Schreiber does creepy incredibly well, and Peter O’Toole does everything incredibly well.  The former’s face and mannerisms do much to unsettle us.  And the latter brings the “Lawrence of Arabia” (1962) treatment to the fifties-esque trope of the monster-fighting hero scientist.

Finally, this might be an odd thing to praise a film for, but I loved its sound effects.  Because that voice (or voices) on the story’s single working telephone was exactly how I wanted the adversary here to sound.

Slam it all you want.  I’ll watch this one again.

I can’t resist plugging a certain excellent Dean Koontz novel here, as I know a few friends in particular who would love “Phantoms.”  I’ve only read a tiny fraction of Koontz’ novels.  (Dear Lord, that guy writes a lot.)  But I’ve always loved the ones that I have read.  They’re quickly paced, they’ve got fun, creative horror-sci-fi premises, and I like stories where the good guys have guns and guts and just fight right the hell back.

“Phantoms,” in my humble opinion, is the scariest Koontz book I’ve ever read.  I think my favorite will always be “Lightning,” with its terrific surprise plot device.  But “Phantoms” is the Koontz novel that best amped up the fear factor.

I can’t describe the story’s antagonist … or even its overall plot, for fear of spoilers.  Suffice to say, a small Colorado town goes off the grid, and investigators arrive to find that something horrible and mysterious has happened there.  Despite that cliche’ setup, the reveal is darkly inventive, detailed, and wickedly illustrated.

The book might also induce smiles because it is such a right-leaning Cold War period novel.  (It was written in 1983.)  Upon discovering Very Bad Things, our Middle American heroes wonder if it’s the work of “the Russians.”  (Terrorism isn’t mentioned, if I recall.)

[UPDATE:  Blog correspondent Len Ornstein just told me he was unhappy with my recent recommendation after he read this book!  Your mileage may vary, I guess.  My rule for this blog is Caveat Reador.] 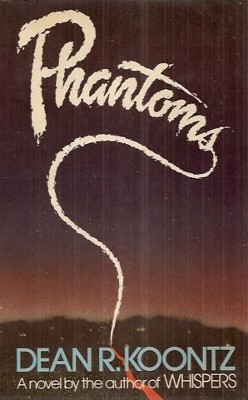 Anyone ever see lightning outside and think of the Dean Koontz novel of the same name?

Damn, that was a fun book.