If you didn’t catch these recordings last week over at The Bees Are Dead, I was honored to read from Dennis Villelmi’s superb book of cosmic horror poetry, “Fretensis: In the Image of a Blind God” (2014).  The Bees Are Dead has graciously allowed me to release them here again at the blog.

Thanks again, Dennis, for allowing me to share your Gothic visions this way.

I am honored today to share with you three recordings of me reading from Dennis Villelmi’s Fretensis: In the Image of a Blind God.  The Bees Are Dead has graciously published the readings over at its website; you can find them right here.

Thank you, Dennis, for allowing me to interpret your outstanding poetic work.

With “Fretensis: In the Image of a Blind God, volume 1” Dennis Villelmi expertly enmeshes the reader in a twisting, troubling narrative that is both mythic and tragically personal for the poem’s speaker. It’s a unique work, employing both arcane myth and personal impressions in equal measure. And it’s a hell of a ride.

“Fretensis” is a 56-page book of dark, modernist poetry divided into three parts and baroquely illustrated with medieval woodcuts and other images of the monstrous and the grotesque. The narrative it presents is like nothing else I’ve discovered reading poetry. Its protagonist is a rich intellect and a troubled soul. The mood of “Fretensis” throughout is striking; the overall work expertly conveys sadness, desperation and an enervating sense of struggle. (In the interest of full disclosure here, Villelmi is a valued friend and a poet whose work I have long admired.)

“Fretensis” might be challenging for the average reader. It might take a seasoned academic to understand all of its references and allusions while also understanding their significance within the poem. Villelmi draws on what appears to be an encyclopedic knowledge of ancient history, myth and religion. (He studied philosophy at Old Dominion University, but his expertise is visibly far more expansive in all of his work.) The title of this story, “Fretensis,” is the name of the Tenth Roman Legion, employed at the start of the Fall of the Roman Empire. As with Villelmi’s other published poetry, this debut book is linked intricately to those myths and symbols from which he draws inspiration.

But this is a good thing. Villelmi’s dark and antiquated iconography makes his work unique and unusually rich. This is a poem that begs for rereading and further scrutiny. I myself gleaned so much more from my second reading.

If I could name one thing about Villelmi’s style that makes his work distinctive to me, it would be how he meaningfully interweaves his esoteric symbols and references with the narrator’s personal experience. That duplexity characterizes the entire book, and it makes “Fretensis” remind me of a personal favorite, W.H. Auden’s “September 1, 1939.” That famous poem and its “accurate scholarship” also uses classical references to frame the narrator’s personal experience in context. (In Auden’s case, he called upon Thucydides, Luther and others to frame his own reaction to the 1939 German invasion of Poland.)

Villelmi’s resulting juxtaposition, which is consistent throughout the book, makes for an excellent poetic device. Memphis, Egypt, is made interchangeable with Memphis, Tennessee. References to Jeudayn are used to provide context for the death of a prostitute. A small boy plays “Deity” in “a grey dirt patch behind [a] garage.”

Consider the context that he employs to describe ravens feeding upon a dog’s carcass:

“Driving, I find it ironic, even inappropriate, that as the roadside augur is a dog on which the forest ravens have come to feast on the meat pulled out from under the fur, courtesy of other scavengers, the convent isn’t named after St. Paul. Paul and ravens both know how to seize an opportunity. Rather, it’s named for Fiacre, an old Irish woman-hater of the woods. I once read there were other Fiacres predating Christ’s arrival on Irish soil; they were warlords, predators by serendipity, much like those ravens chowing down on the mutt.”

And Villelmi’s mastery of the language is truly enviable. I found myself most immersed in “Fretensis’” prose-poetry sections. I’m not sure why, but here is where I best felt that I could identify with the narrator. These seemed the most personal to me. They’re so beautifully illustrated by the narrator’s sad, resigned voice that they have the feel of a genuine vignette spoken by a real person.

Consider the opening of “Part II: The Whore’s Afternoon.”

“On my ongoing canvas, there’s only been caricatures and carcasses, with a highway torture dividing the two. Somewhere, I took a detour of forgeries and virgins, and lost the rest of the America I was meant to see …

“Every time I try to measure the time I get a case of dry mouth. That’s how I met Ettey, Ettey Roth. She, too, had a memoir, not unlike mine, and it was over slugs in Seire’s Tavern time and again that we found the mutual souring of our lives to have been rooted in the hems of our birthplaces.”

All in all, “Fretensis” depicts a universe that is both twisting and twisted – a byzantine existence where an eloquent narrator’s darkness is informed by far greater forces that are divine, demonic or both. It’s an accomplished book of poetry that deserves not only to be read, but reread and reconsidered … assuming that you are willing to take that winding, redoubtable journey more than once. 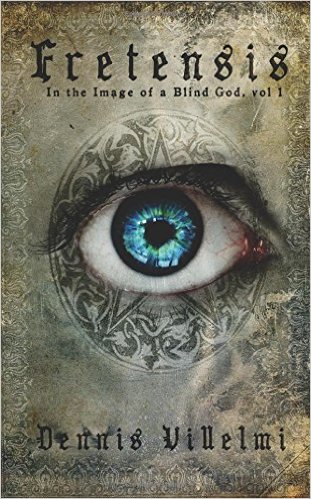 “On my ongoing canvas, there’s only been caricatures and carcasses, with a highway of torture dividing the two.  Somewhere, I took a detour of forgeries and virgins, and lost the rest of America I was meant to see …

“Every time I try to measure time, I get a case of dry mouth.  That’s how I met Ettey, Ettey Roth. She, too, had a memoir, not unlike mine, and it was over slugs in Seire’s Tavern time and again that we found the mutual souring of our lives to have been rooted in the hems of our birthplaces.”

— from “Fretensis, in the Image of a Blind God, Volume 1,” by Dennis Villelmi

Today was the cover reveal for poet Dennis Villelmi’s first book — and it is both frightening and gorgeous.  It was created by Matt Davis, the same talented artist who created the cover for J. S. Collyer’s recent “Zero.”

“Fretensis, In the Image of a Blind God, vol. 1” is a book of horror poetry that promises to be unique.  I have been following Dennis’ published poetry for years, and I envy his combination of abilities. He writes the darkest verses out there, combining gut-wrenching imagery with a impressive and esoteric knowledge of classical, biblical and ancient themes.  His writing is actually a little difficult to describe.  I was having coffee with another writer just a month ago, and had advised her to read the pieces he’s already published at Dagda’s website — but you really do have to read Dennis’ work to see exactly what he does.

The release date is Halloween.

See Dagda Publishing’s Facebook page for its announcement about the cover reveal and the Oct. 31st release.

“… and with that question always does it feel that “In the Image of a Blind God” isn’t so much an epic poem that I am composing, but rather, is an epic poem composing itself through me.”  — Dennis Villelmi, on the development of “Fretensis” (Book I of “In the Image of a Blind God”), his book of horror poetry to be released by Dagda Publishing on Halloween.

So now I have yet another reason to look forward to October — my very talented colleague Dennis will be releasing his first book, and it sounds damn appealing to horror fans or to anyone who enjoys poetry.

From Dagda Publishing’s newsletter today:  “A work of mad genius,a manuscript of the damned, Fretensis tells tales of Damzui, Lord Of The Husks, through the ages of mankind, of the games that the Celestial Beings play with mortals (sometimes through malice, sometimes because it is merely within their nature), it lurches from Ancient, marble-columned Rome to the dust-blown American Midwest of the modern day to the inner-most darkness present within the corners of our psyche. Featuring madness-cursed immortals, thrice-damned whores and a myriad of characters, all with their own agendas and insanities.”

Yes … that sounds like Dennis!  I’ve loved his unique brand of dark, vivid poetry when it has appeared with Dagda’s publications before, as well as over at his website, “a death’s head in green light” (http://dentatus1976.wordpress.com/).   (See my reblog of “Medalion” yesterday.)  And this upcoming book sounds damn appealing, and perfect for All Hallow’s Eve.