I really missed the boat with last week’s Throwback Thursday — it was the 50th anniversary of the entire “Star Trek” franchise, with the first episode of the original series airing on September 8, 1966.  (And even the term “franchise” seems way too narrow to describe “Star Trek” in all of its incarnations — it’s really more like a permanent part of western popular culture.)  I’m not old enough to remember the show’s original run, which was a surprisingly scant three years.  But I remember it in syndication when I was not much more than a baby in the mid- to late 1970’s.

“Star Trek” was something that my older brother and maybe my father watched.  (I was fixated on programming that was more comprehensible for young kids, like “Land of the Lost” and reruns of “The Lone Ranger.”  Seriously, the original black-and-white serial western was still in reruns back then.)

But “Star Trek” was definitely something I was attracted to as a tot, doubtlessly resulting, in part, from the contagious ardor for it that I saw in my older brother.  (He might not admit it today, but he was a bit of a hard-core science fiction fan long before I was.)  The show was on at our tiny house in Woodhaven, Queens, quite a lot.  He also had toys and posters connected with it.  (And anything my older brother owned was something I endeavored to play with when he wasn’t looking.)

He had that Captain Kirk toy among the figures produced by Mego that you see in the bottom photo.  (Again, 1970’s “action figures” were often pretty much indistinguishable from dolls.)  In the early 1980’s, he had a totally sweet giant poster depicting diagrammed schematics for The Enterprise in surprising detail.  I’ve Google-searched for it, but found only similar pinups.  The one hanging in the room we shared was blue.

I remember him annoyedly correcting me because I called it “Star Track.”  (I did not yet know the word “trek.”  I myself was confused by my own mistake; I knew that there could be no “train tracks” in space, even if I studied the opening credits one time just to make sure.)

I was precisely the sort of pain-in-the-ass kid who fired off an incessant barrage of questions when I saw something on TV that I didn’t understand.  My father was patient to a fault when I punctuated his World War II movies with inane questions.  (I’m willing to bet I eventually acquired more knowledge of the war’s European theater than the average six-year-old.)  My brother was not always so forbearing.  I actually remember him changing the channel away from shows he was watching, like “Star Trek” or “MASH,” if I joined him at the little black-and-white television we had in our room.  (The poor guy needed me to lose interest and go away, so that he could at least hear the damn show.)

Certain “Star Trek” episodes remain memorable to this day, even if I understood maybe 15 percent of what transpired onscreen.  The was The One With The Domino-Face Men, which the Internet now tells me was actually titled “Let That Be Your Last Battlefield.”  Then there was The One Where Kids Ruled Themselves on a Deserted World, which made a really big impression on me.  (The Internet tells me this one was “Miri.”)

As I grew up, the show faded from prominence in my child’s psyche.  It was just never my fandom of choice.  Nor was it for many other kids I knew … by the 1980’s, it was already considered “an old TV show.”  The kids on my street were always excited about the feature films; even if we were underwhelmed by the “slow” first film in 1979.  Blockbuster movies were major events back then, and fewer, and they were enigmatic in a way that is impossible after the Internet’s arrival.  (I think that Millennials will never be able to understand that, in the same way that you and I can never appreciate the vintage “serials” that our parents watched before the main feature at a Saturday matinee.)

In the 1980’s, just about every boy I knew was preoccupied with the space-fantasy of “Star Wars.”  On television, we had cheesefests like the original “Battlestar Galactica” and “V.”  As we got older, we gravitated toward the “Alien” and “Predator” film franchises.  At home, I read Orson Scott Card and Harry Harrison, and as I approached college toward the end of the decade, I’d discovered Arthur C. Clarke.  If we’d known another kid who was really into “Star Trek,” I’m not sure we would have considered it “nerdy.”  It would just have been very weird, because it we viewed it as a campy tv show from maybe two decades prior, like “Bonanza” or something.  I don’t think I ever even thought of the franchise as really relevant or popular until I was at Mary Washington College in the 1990’s.  “Star Trek: the Next Generation” would regularly draw kids out of their dorm rooms into the lobby at New Hall.

Still, it’s hard not to develop an emotional attachment to something that stimulated your sense of wonder as a tot.  I … felt pretty damn sad when Captain Kirk died in 1994’s “Star Trek: Generations.”  I saw it in a theater in Manassas, Virginia, I think, with my girlfriend at the time.  She actually felt she had to console me after seeing how doleful I was on the drive home. 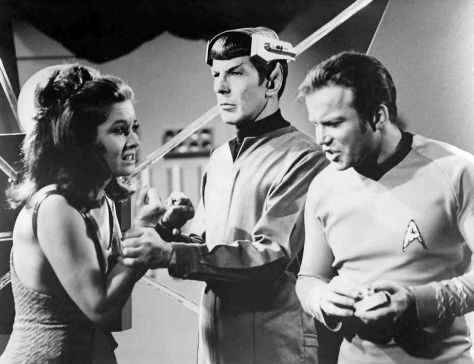