This will probably strike many as a strange summer memory, but I listened endlessly to the “Platoon” soundtrack during the summer of 1987.  (The movie was released at the end of ’86; the tape arrived in stores later that winter.)  I bought it the following summer, just before my sophomore year at Longwood High School, and it served as the soundtrack for the “diving” expeditions at my friend Brian’s house.

Brian lived on an immense lake.  Our “diving” was really just two dorks snorkeling (dorkeling?), while one of them pretended to be various heroes from Peter Benchley novels.  (I’d inherited a few from my Dad.  Benchley wrote all sorts of sea-based horror-thrillers, people, not just “Jaws.”)

I swear that some of my happiest summer memories will always be snorkeling that lake.  It was an landscape as alien as I imagined the moon might have been — fantastic, airless, unknowable, and even apprehension-inducing.  Brian and his kid brother Brad had gravely intoned to me their accounts of the black eels they’d encountered underwater; the impression they made on me was enough to make me startled at the sight of any vague, longish shape that I spotted beneath the surface.  (We all still loved seeing fish, though.  I’ll never forget that curious sunfish who approached my face so closely that it looked like he was about to kiss my mask.)

Anyway, the “Platoon” soundtrack was known to play while we prepared for one of our forays, or when we were taking a break in Brian’s basement.  (Believe it or not, snorkeling can be slightly vigorous exercise if you do it long enough — especially if you’re wearing flippers.)  I’d brought it along on cassette, of course, as DVD’s weren’t a thing yet.  And sometimes we’d listen to it and other tapes when we were brainstorming our plans to appropriate some radio-controlled planes.

Brian and I absolutely fetishized RC planes for a while … neither one of us owned one, but we wanted to — very badly.  Fueling our greed for the pricey toys were a couple of catalogs Brian had ordered from a hobby company.  (The Internet wasn’t a thing yet.)  We hatched various plans to raise funds for their purchase — I think mowing lawns was the go-to option back in the day for kids who weren’t old enough to drive.  I occurs to me as I write this now that a smarter or more ambitious pair of high school boys would probably have focused on earning money for actual cars, rather than their radio-controlled equivalent — driving age was only a couple of years away.  Brian had a thing about RC boats, too — a predilection that I thought was entirely lame.  But, then again, I was the one without a lake in his backyard.

I’d bought the “Platoon” tape at Smithhaven Mall because of Samuel Barber’s “Adagio for Strings;” I was a nerdy enough kid to do that.  (That’s the instrumental score that most people think of as the “Platoon movie music.”)  But I quickly came to love the “Songs From The Era” selections on the rest of the tape — it was really my first sustained exposure to the music of the 1960’s.

The Doors’ “Hello, I Love you” was my instant favorite; Jefferson Airplane’s “White Rabbit” was another favorite.  (I have a habit of quoting its lyrics to this day.)  I still love every song on the album, really, with one exception.  I really liked Otis Redding’s “Sittin’ on the Dock of the Bay” when I was in high school, but my affection for it has definitely faded.  Today it’s a slightly annoying earworm, and I might have to play some Doors right now to get rid of it. 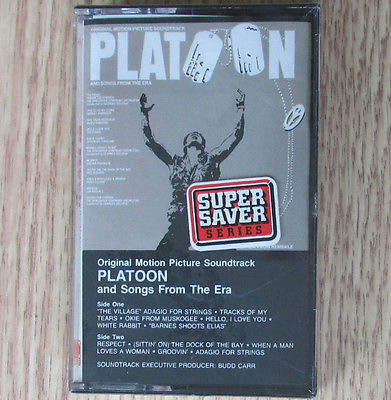 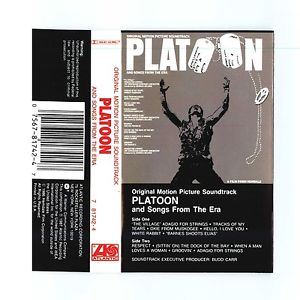 I’m relaxing with the “Twin Peaks” soundtrack this Sunday afternoon; it was a favorite for Kathleen Nolan.

Once upon a time, when she was preparing a quite difficult teenager in Lake-of-the Woods, VA, for college, it was one of the few things that we could agree on. (Another that year was Garrison Keillor’s “A Prairie Home Companion” on cassette tape.)