Pictured is Bushnell Hall at Mary Washington College in Fredericksburg, Virginia.  I lived here during the 1990-91 school year.  It was a freshman dorm then; I don’t know if that’s still the case.

I arrived here just before my 18th birthday; this was the first place I ever lived away from home.  I have never admitted it until this moment, but I was terrified watching my mother’s car pull away after I unloaded the last of my things.  That terror lasted … two hours?  Three?  After my first dinner with the other Bushnell kids at Seacobeck Dining Hall, Mary Washington College felt goddam perfect.  I never wanted to leave.

My dorm room was on the bottom floor, second from the right in the picture below.  It was a suite — there were two rooms connected by a small bathroom.  And there were six 18-year-old boys living there — yes, that means three to a room.  Good lord, those were close quarters.  We were awakened twice a week by the BEEP-BEEP-BEEP of the garbage truck reversing to empty a dumpster outside our window.  And this was in a room without air conditioning, in Virginia, where teenagers were experiencing college-level academic stresses for the first time.  I helpfully eased tensions in the suite by playing Depeche Mode’s “Policy of Truth” 3,043 times.  The other five guys LOVED that.

There were even good-natured jabs connected with the North and the South.  I habitually and dryly referred to one of my suitemates as “South Virginia;” he addressed me just as dryly as “Long Island Piece of Shit,” (or just “L.I.P.S.,” for short).  He also took to calling me “Urban Spillover,” an appellation he derived from one of Dr. Bowen’s “Geography of North America” classes that mentioned Long Island.  For some reason, the latter nickname absolutely felt more pejorative.

Seeing those double white doors beside my room below, and that steep hill in the following photos, will always remind me of my 18th birthday.  A group of first-floor guys and fourth-floor girls had gathered inside that door just after moving in during the August of 1990, before classes started.  A polite debate stirred there about whether opening those doors would set off the fire alarm.  (They were clearly marked “Fire Doors” by an electric sign but … the LIGHT wasn’t on in the sign.  And surely the administration wouldn’t require the guys on my floor to walk up an entire flight to the lobby just to exit the building, right?)

Without a word of warning, one of the first-floor guys spontaneously decided to test this theory by just blasting right through it.  (No, it WASN’T me.)

The fire alarm went off.  Everyone panicked.  The guys and girls all shot down the hill outside Bushnell after the guy who’d triggered the alarm, and we all ran … right off campus.  We didn’t stop running until we’d reached somewhere along William Street, I think.

But not all of us escaped without injury.  One of my roommates was a tall, burly guy from right there in Fredericksburg, and he slipped in the sand and loose gravel that characterized that hill during that long ago August.  I still remember that dull, loud, discordant thump-and-rattle as his body hit the slope, while my own lungs were pounding.  When we reached the spot along William Street where our panic finally subsided, we all turned and gaped at his wound.  One of his legs had become a sepia Monet of sand-encrusted blood.  There were still pebbles clinging there, I’m sure of it.

He took it like a trooper.  I guess … he just walked it off.  And we walked around the ENTIRE town.  We were scared to return to campus, what with images of arrest and expulsion dancing in our teenage minds.  (We all might have overreacted a little.)  So we went on a truly lengthy hot summer trek that circled all of the historic downtown area.  (I think we wound up at Carl’s Ice Cream on Princess Anne Street at some point.)

That was really when I saw the City of Fredericksburg for the first time.  I remember thinking that the South seemed like some other world — or maybe the same world, but 100 years ago.  And I don’t mean that in any negative sense.  It genuinely confused me that this town was called a “city,” but it just seemed idyllic and old fashioned and beautiful.  I’m not sure if the average Fredericksburg resident realizes this, but their city indeed makes an impression on newcomers.

Somewhere along the way, I finally let it slip that the day was my birthday; I think heat exhaustion influenced my usual reticence on the subject.  A couple of the girls stole away to a card store on Caroline Street, I think, and bought a card for me.  My new friends all signed it for me upon our eventual return to Bushnell Hall that day (which was thankfully not occasioned by even a mention of the fire doors).  I went to bed that night thinking that my new friends were a pretty decent group.

Anyway — more on my roommate’s injury … he was a bit of an eccentric guy, and one of his eccentricities was that he did not like to go to the Campus Health Center.  He cleaned his long leg scrape himself, and then … bandaged it with duct tape.  That’s right — duct tape.  He’d apparently brought some along with him as an incoming freshman, just in case of an emergency.  You can’t say it was a needless precaution — here he was, using it in lieu of bandages.

He walked around campus like that for a while.  He looked a lot he was wearing part of an extremely low-budget “Robocop” Halloween costume.  I honestly don’t know what transpired when it came time to remove the duct tape, and I’m not sure I want to.

You can’t make this stuff up. 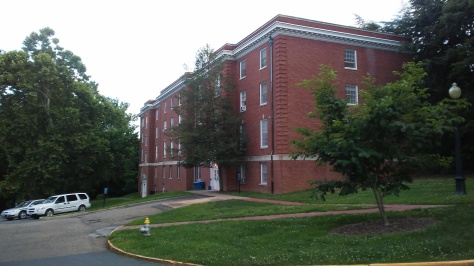 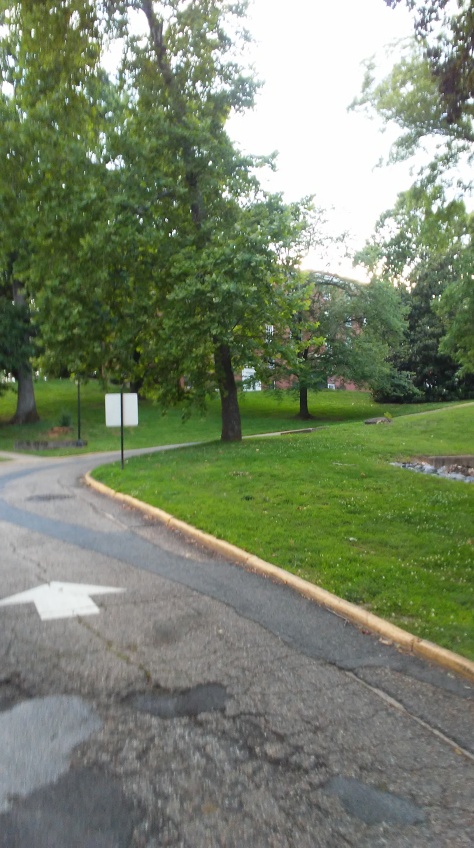 This the dorm’s south side.  If you face Bushnell looking north, the southern cap of the rectangular campus will be at your back.  Today, it is is one the last places of the main campus’ 234 acres that remains undeveloped.

I’m not sure if there is any connection here, but there is a large mound of dirt among the trees and ivy that was rumored to be the remains of a Civil War fortification.  It makes sense — that hill commands a view of the city; that’s why I used to go there to have my once-a-day Newport menthol cigarettes around dusk.  And in the Nineteenth Century, before William Street’s more modern buildings were erected, I’ll bet you could see Marye’s Heights and the key sections of Sunken Road where the Battle of Fredericksburg raged.

I chatted with a girl on the steps of Bushnell once who told me she’d spoken with the ghost of a Civil War soldier.  She actually carried on a brief conversation with him.  She re-enacted the exchange after a some urging from me, but I wound up giving her story little credence.  I didn’t exactly believe in ghosts, and she sounded like an actress confused about a role.  (I wasn’t sure why her Confederate soldier would speak with a British accent.)

The Mary Washington College Campus looked as beautiful as ever last week — it was only marred by the occasional sign bearing an embarrassing misprint.  (They perplexingly refer to the misnomer “University of Mary Washington.”)

At first I hesitated to visit the campus during my stop in Fredericksburg, Virginia on my way to Washington, D.C.  I asked my Alumbud if two men in their 40’s would look suspicious there, given the increased security on today’s college campuses.  He told me to relax — people would assume we were two fathers scouting the school for their respective offspring.  That made me feel really, really old.

Monroe Hall and The Fountain.  When I went to school at MWC, that fountain was occasionally doused with either detergent or dye as a prank.

Virginia Hall.  In the early 1990’s, this was a dorm exclusively for freshmen girls; I don’t know if that’s still the case today. 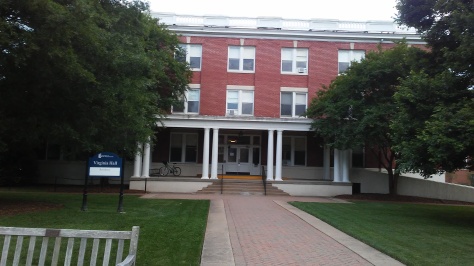 You can’t see it here, but beyond that hedge and beside Monroe is Campus Drive, curving down past the amphitheater to Sunken Road.  The long hill is still entirely wooded, and is still arguably the prettiest part of campus. 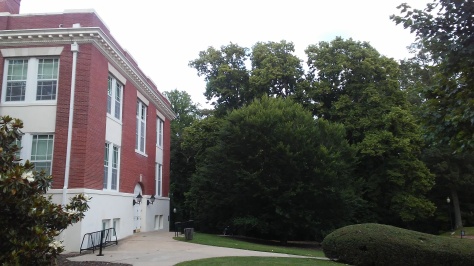 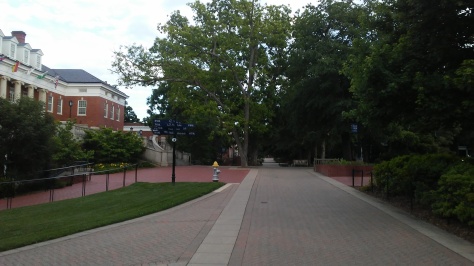 This is cute.  I’m guessing it was a product of the recent remodeling?  But which way to Winterfell?  Metropolis?  Which way is Caprica City?  I have tickets for a Buccaneers game next week. 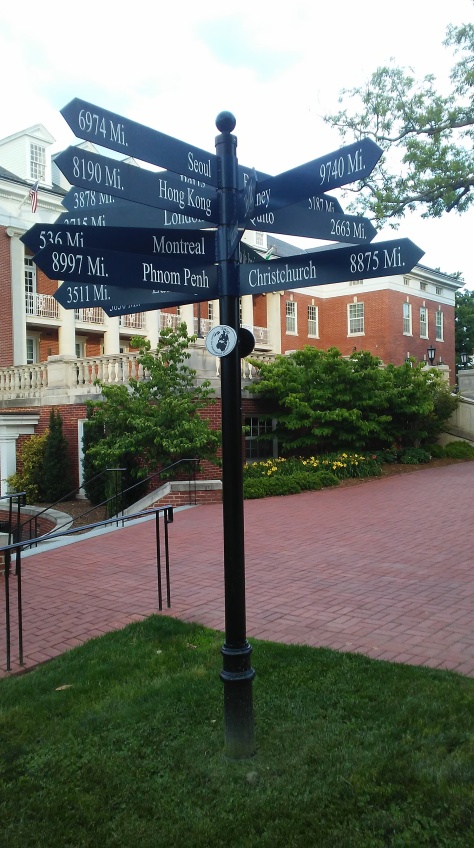 Here is where the College Bookstore used to be (beside the Campus Police Station in the lower part of Lee); I’m told now that it’s in a vastly larger space upstairs.

And The Underground has returned!  It closed after my freshman year in 1990-91.  I met a lot of good friends there, and I heard my first live blues at The Underground, too, performed by Saffire, The Uppity Blues Women.  (I only just now learned that Saffire’s Ann Rabson sadly passed away in 2013.)

[Update: an alumna just told me that she can remember when The Underground was called “The Pub.”]

Campus Walk and Trinkle Hall.  My Alumbud reminded of what seemed like a big issue back in the day — the students’ desire to have a 24-hour study hall.  They successfully petitioned the college administration for it, and at some point toward the end of my college career, Trinkle began staying open all night.  If that sounds incredibly nerdy, it was.  But it was also a pretty big quality-of-life issue for the dorms.  A lot of people needed a place to go to cram before finals, in order to keep the peace with a sleeping roommate.

The “computer pods” were also located here, downstairs, in a basementish-type space that was air-conditioned to the point where it felt freezing.  You always had to bring a jacket or sweater to do your work there. 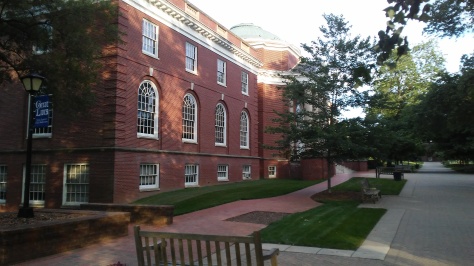 Looking south on Campus Walk, you can just barely make out the Bell Tower, a product of the campus remodeling.  You used to be able to see Bushnell Hall, my freshman-year dormitory. 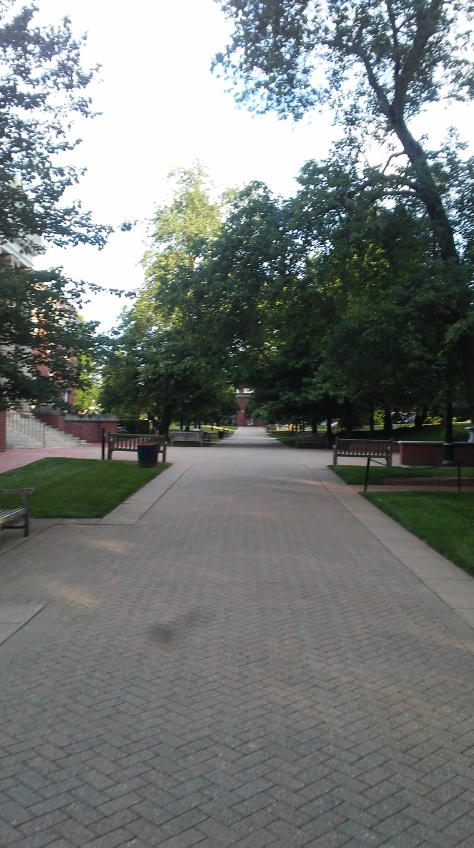 The bust of Dr. James L. Farmer, Jr. that the school erected opposite Trinkle Hall in 2001.  He was one of the nation’s foremost leaders in the Civil Rights movement, founding the Congress on Racial Equality (CORE) and organizing the “Freedom Rides” to desegregate interstate bus travel.  Dr. Farmer was my Civil Rights professor in 1992, and he was universally admired by his students.

Some weird old guy wandered into the photo here — sorry about that.