It’s a gimmick horror film, but the gimmick kinda works –a powerful demon possesses an oral game of “truth or dare” — then follows its players home from vacation with lethal consequences. It’s actually not quite as stupid as it sounds; I had fun with the premise, which sounds like the basis for a decent “The X-Files” (1993-2018) episode.  An exposition-prone minor character explains to our protagonists late in the game that demons need not infect only people and objects, but also “ideas” like games or competitions.  The notion of an idea or a philosophy being demonically possessed has a hint of creative brilliance, and I’d love to see it fully developed in an intelligent, well written horror film.

Alas, this isn’t it.  And instead of lovable heroes like Mulder and Scully, we get a predictable, throwaway group of unlikable teens on spring break.  The movie’s most interesting character is the one it sets up as the stereotypical jerk, Ronnie, adroitly played by Sam Lerner.  The film would have been much better if it had fleshed him out as a three-dimensional character, and had the story revolve around him as a surprise anti-hero.

Oh, well.  The movie still doesn’t deserve the hate it gets.  I figure it’s at least a fun time waster before bed on a weeknight. 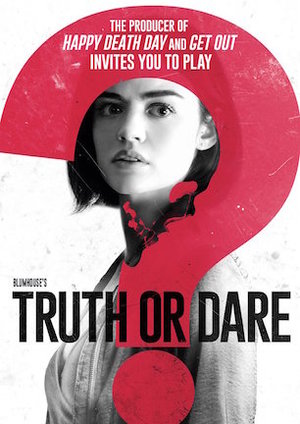 Or is it just more evidence that I have too much time on my hands?

I made a Twitter account a while back with the name “It,” and with a profile picture of the shapeshifting, deadly phantom from “It Follows” (2014).

I’ve tweeted absolutely nothing.  But, true to the monster’s modus operandi, I am silently “following” randomly selected people on Twitter.

It’s only horror movie fans, who I think will get the joke, along with various horror websites and directors.  I did take care to follow each cast member of the truly superb film itself.  It looks like star Daniel Zovatto even followed me back.

My first problem was its premise.  Two teenage aspiring filmmakers play an elaborate high-tech prank on an elderly neighbor by installing hidden cameras in his home and then manipulating his environment: causing his lights and TV to malfunction, causing his windows to break, and even adjusting his thermostat to plunge the temperature so he’s forced to cope with the bitter cold.  They plan to mimic a haunting, and they rationalize it because he actually is a horrible person, well portrayed by James Caan in an understated performance.

Here’s what doesn’t make sense — what the teens are doing is against the law, and they know it.  (One explicitly states it at least once mid-way through the film.)  I count trespassing, criminal mischief and unlawful surveillance to start with, and I’m willing to bet they’d face charges for harassment too.  Yet they fully intend to makes themselves “famous” via the Internet with this cruel prank/documentary.  They shoot lengthy footage of themselves narrating the construction and implementation of their project; this is intended as part of the documentary.

But why would they upload detailed, inclusive evidence of their crimes to the Internet?  If they truly become “famous” with thousands of “hits” for their video, wouldn’t that mean countless people could bring them to the attention of the police?  (And, truthfully, even if they tried to remain anonymous, I’m sure any competent investigator viewing their video would at least count them as suspects.  One lives right across the street from Caan’s character.)

For much of its running length, “The Good Neighbor” actually succeeds at being a serviceable horror-thriller — if you can get past that hole in the premise.

But then we come to the second problem with this movie.  Towards its end, it takes an unexpected dramatic turn.  It stops being a thriller, and simply becomes a particularly sad drama.  I don’t want to say to much for fear of spoilers, suffice to say it’s a real downer.  But it isn’t frightening at all — or even terribly entertaining.

The only part near the end that pleased me was the movie’s final shot.  It was ambiguous, but it suggested a nice new level of character depth.  I thought it was neat.

Oh well.  Maybe others will enjoy this film more than I did.  I myself can’t recommend it, and I’d give it a 5 out of 10.

Postscript: you can have some fun here trying to figure out where you’ve seen these teenage actors before.  They’re both veterans of horror.  The mild-mannered one is Keir Gilchrist, who horror fans will recognize from “It Follows” (2014).  The meaner, more manipulative of the pair is Logan Miller, who played the goodhearted Benjamin in this past season of “The Walking Dead.”  It’s so weird seeing him play such different characters.

I’ve read that renowned horror author Brian Keene criticized the popular audience backlash against 2015’s “The Witch,” saying that “90 percent of the people in the theater … will be too stupid to understand” it.  Well, maybe I am among the stupid 90 percent.  I’d name this movie as the most disappointing horror film in recent memory, and I’d rate it a 2 out of 10.

I … think I understand it.  I just didn’t like it much.  It is alternately boring and sad.  It is boring far more often than it is sad.  When it is sad, it isn’t the cathartic, meaningful, artistic “sad.”  It’s just kind of a grimace-inducing downer.  There are problems with pacing, tension and story structure.  The movie only gets interesting during its closing several minutes.

These problems, however, are overshadowed by the movie’s biggest flaw — most of the (literal) Puritans populating this period story are so unlikable that you’d care little about what happens to them.  They are verbosely, tiresomely God-obsessed.  I myself might strike a deal with the devil if he’d silence the two creepy tots, and maybe the shrewish, hysterically shrill mother (Kate Dickie), too.  He wouldn’t have to kill them or anything — muting them would suffice.

Yes, the film does succeed somewhat in establishing mood and tone.  But the result is still nothing to write home about.  This isn’t “It Follows” (2014).

The film has two things going for it.  One, as other reviewers have noted, it achieves authenticity quite well.  The sets, costumes and dialogue were so meticulously developed that I actually did believe we were in 17th Century New England.  Two, Anya-Taylor Joy wonderfully performs the role of young Tomasina.

Those two things do not redeem the film, however.  I’d skip this. 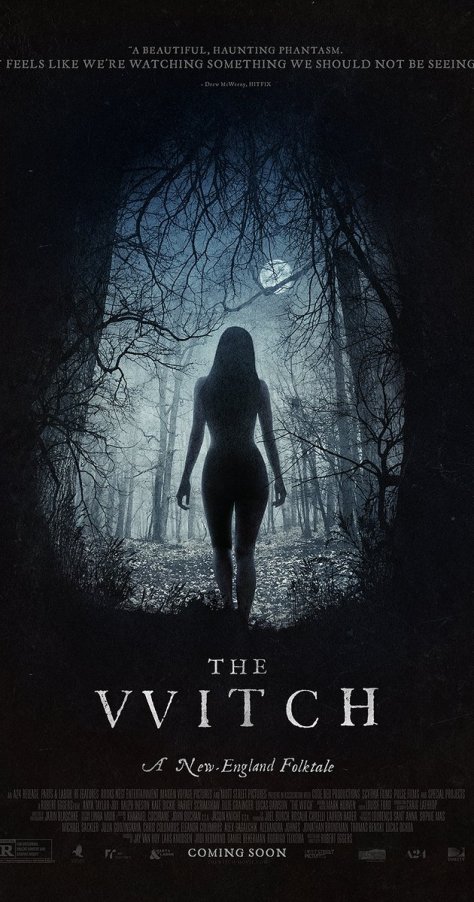 [WARNING: THIS REVIEW CONTAINS MILD SPOILERS FOR “IT FOLLOWS” (2014).]

A smaller budget doesn’t hurt this great indie horror film; I’d give “It Follows” a 9 out of 10.

It’s smart, surreal, creepy and atmospheric, and it’s beautifully shot.  Maybe it has some similarities with “The Ring” series, and also the little known excellent horror film, “From Within” (2008), but it’s still darkly creative and original.

It’s damn scary too — it’s terrific what this film accomplished with what looks like minimal CGI.  For some reason, a certain shot of a rooftop really got under my skin.  So, too, did a sequence depicting friends unable to warn a major character, because they’re unable to see “It” approach.

I have always had a weird thing about dopplegangers.  Other people hate clowns; I get creeped out by shapeshifters.  I’m frightened by any monster that can masquerade as allies or loved ones.  It’s part of the reason that the Alien Bounty Hunter worked so well for me as an antagonist on “The X Files” (1993), and why the T-1000 scared me in “Terminator 2: Judgement Day” (1991).  Even Mystique, “The X-Men” franchise’s anti-hero, could be a little unsettling every once in a while.  (An attack on Wolverine BY Wolverine?  Leaving his confused teammates unable to help?  That’s a little creepy.)

There are a bunch of themes served up by “It Follows” that you could walk away discussing with your friends; online critics are quick to point out sexually transmitted disease.  (A little on the nose, don’t you think?)  They also pointed out mortality — this was something that I actually missed, despite the fact that it was helpfully hinted at by one character who periodically reads Dostoyevsky aloud.

I personally thought the film tapped into a bunch of sexual taboos and anxieties — especially incest.  Consider the conversation about one character kissing a sibling, a face we see in a framed photograph toward the end, and the way “It” attacks another major character.  I also saw victimization — as with “The Ring,” the victims of the monster here are presented  with a tremendous moral quandary about how they might save themselves or at least forestall an attack.

Is water a motif?  Much screen time is devoted to characters entering pools or the ocean; one person also begs for water during an attack.

And what about wealth?  Much seems to be suggested by characters traveling from an affluent neighborhood to a poor one.  And all those sweeping shots (and excellent long tracking shots) of the protagonists’ beautiful neighborhood really stayed with me.  I kept thinking about how much I’d like to live there.

I’d love to know more about the origin and modus operandi of “It.”  There is a sequel planned, according to Wikipedia; that’s one of its possible plots.

This is a terrific scary movie!  Watch it tonight!