I’m honored today to discover that Newsday published my letter to the editor about the 20th anniversary of the September 11th terror attacks.  (It is an edited version of the letter that I submitted.)  If you are a digital subscriber to Newsday, you can also read it online here.

Newsday is not only the newspaper that I grew up with — it is also the third largest paper in all of New York State and one of the largest in America.  It has a weekday circulation of 437,000, and reaches nearly half of Long Island’s households.  The 80-year-old publication has been the winner of 19 Pulitzer Prizes, with nominations for 20 more.  I am especially grateful to its editorial staff for selecting my letter for such an esteemed newspaper.

We were a different country then: wounded, but undivided; scarred, but undeterred; enraged, but not at one another.  The America that rallied and unified in the wake of the terror attacks seems as vanished now as the Towers themselves.

We were a nation of neighbors, as though the dust thrust up from a burning New York City had cleared to reveal an even greater Republic.  We huddled together under the smoke blowing up from the charnel pit, then reached to lift one another to higher ground.  We bolstered one another with whatever words we could find, in the interminable spaces after our dead had fallen silent, after the soot in the emptied streets had muted even our own footfalls.

We rose up as one to retaliate — and struck out across the world with a single fist.  We were more than a superpower, more than an aggrieved people.  We were these United States.

I want to believe that we can be that country — those people — again.

That is why today, fully two decades later, I will picture who we were.  And I will tell myself, never forget.

Auden set it in a bar in New York City.  (He actually immigrated there in 1939; many casual poetry readers are unaware that he had dual citizenship with Britain and America.)

I wonder what Auden would think of the early 21st Century, here at his adopted home. I t started with the September 11 terror attacks and has arrived at a pandemic that has killed 443,000 Americans (along with nearly 94,000 back in his native Britain).  Evictions and unemployment have predictably risen right along with the deaths.

And America seems the closest now to civil war since … the actual Civil War began in 1861.  (We did, after all, see one side storm the Capitol to attack its democratically elected government.)

I’ll bet our anxiety could give Auden’s a run for its money.

9/11 memorial flag to firefighters and police killed, across from FDNY Ladder 10.

Between the towers of the World Trade Center as a cloud passes between them.  November 1998.

There is no such thing as the State
And no one exists alone;
Hunger allows no choice
To the citizen or the police;
We must love one another or die.

Defenceless under the night
Our world in stupor lies;
Yet, dotted everywhere,
Ironic points of light
Flash out wherever the Just
Exchange their messages:
May I, composed like them
Of Eros and of dust,
Beleaguered by the same
Negation and despair,
Show an affirming flame. 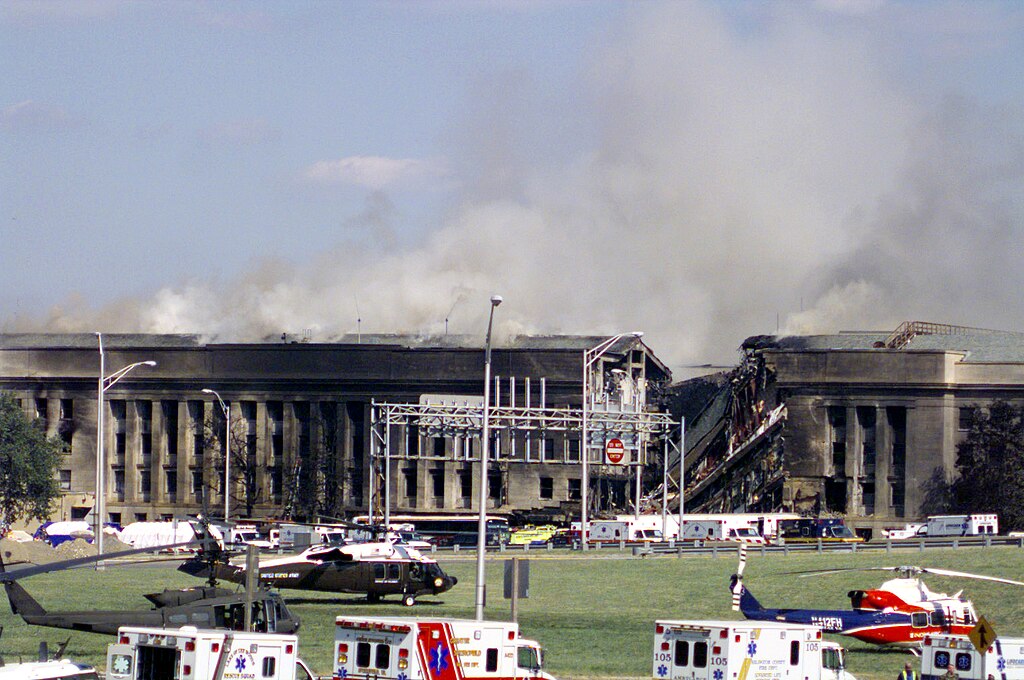