I’m not sure who our mystery predator is here.  As I’ve noted before, there is a notable dearth of stray cats in Roanoke.  I occasionally see one — but it’s nothing like my native New York, where stray cats outnumber people with a clean driving record.

Maybe the pupper next door did it.  I dunno.  He seems to be one of those gruff dogs who’s nevertheless timid (and adorable).  He sort of grumble-barks tentatively and then goes instantly quiet when you make eye contact with him.  He wandered into my backyard last summer and spent at least five minutes literally trembling in front of an empty tent, before he got up enough courage to bark at it.  Eventually he even ran away from that.

Whatever the case, I hope that the little patch of ground below doesn’t lie along a suburban game trail.  The is a place where bunny buds are known to roam.  And the last one I startled there just ran in a confused figure eight — and then mistakenly ran at me for a moment instead of away.  (Little brown fella had some kind of spatial relations problem.  Or maybe he was channeling General Woundwort.) 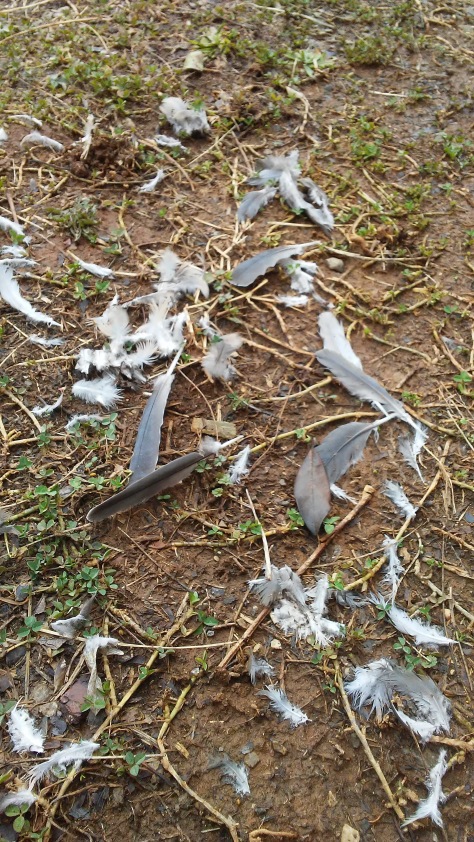 Publisher: Rex Collings.  I can’t determine the name of the cover artist.

Seriously. The annual influx of little brown bunnies has arrived. There’s a warren somewhere under my backyard.

I gotta get some video for you guys.  I tried last year, but those little fur-twerps are quick and shy.  I felt like a paparazzi last spring zig-zagging around my yard with my cellphone camera. Neighbors thought I was nuts.

[Update: a “warren” is a rabbit burrow, right? I can never remember my “Watership Down” accurately.  I don’t mean that a guy named “Warren” is buried somewhere under my backyard. This is Roanoke, not New Jersey.]

Hey, my neighborhood’s home-crashing hare is back!  I call him Random Rabbit because he has no burrow — he just randomly selects backyards to occupy.  He was my guest for a while, but then he ambled across the street and inhabited another backyard.  (I think he was annoyed by my picture-taking.)  I think he just crashes random residences like a big, weird, puffy white houseguest.  (Think Kato Kaelin.)

Roanoke’s ecosystem puzzles me.  This is a slow, truly torpid prey animal who seems to have little healthy apprehension about other animals.  He’s doing just fine, though.  A nearby pit bull usually just gives him a wary stare … maybe dogs and cats are afraid of him because he’s so huge?  This picture doesn’t do him justice — he’s the biggest rabbit I’ve ever seen.  He’s probably about the size of General Woundwort from “Watership Down.”

[Update, 6/5/17:] Okay now all my friends are telling me he is very likely an abandoned pet.  So I might start feeding him.  My pals are recommending “dandelions, lemon balm, and carrot tops.”

I myself am just relieved that other people can see him.  I was harboring a pet hypothesis that he was my equivalent of “Frank” from “Donnie Darko.”  (He’s almost as big.)

And it’s past midnight!!

I remember the film adaptation’s voiceover saying near the end that “General Woundwort’s body was never found.”  I’m not scared.  I have a certain rapport with the truly most terrifying fictional “rabbit” of all time, Donnie Darko’s “Frank.”  (He appears in my mirror from time to time.)  That tall prognosticating hare would PWN Woundwort and his entire Owsla. 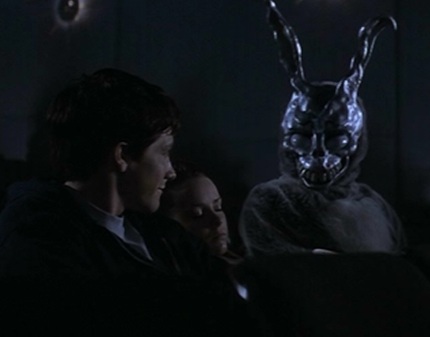