I’m honored today to see my poetry featured for the first time in “Peeking Cat Poetry Magazine.”  The poem is a recent piece, entitled “hens staring upward,” and begins on Page 25 of Issue 8 (October 2015).

Or, you can purchase the magazine in paperback format for just $3.50 right here:

Peeking Cat is an outstanding magazine in the United Kingdom, publishing poetry and flash fiction from writers throughout the world.  I’m grateful to Editor Samantha Rose for allowing me to share my voice with its readers.

Yeah, okay, that pales in comparison to my friends who have 400 or more.  But I feel like David Koresh!  Except … nonviolent.  And nonreligious.  And I’m only a BORDERLINE sociopath instead of the full shebang.  Whenever I feel my worse half coming on, I warn those near me with the Taco Bell slogan, lest they be affected when I MAKE A RUN FOR THE BORDER.

Seriously, though, THANKS for reading, guys!  Given that at least 100 people are now “following,” I feel like I should express some sort of coherent ideology here, instead of just horror movie reviews, tips on which comics to read, and my own misguided attempts at portraying myself as among the literati.

So I have resolved to produce a manifesto.  Don’t hold your breath; it might take a while.  But I’ll write it and place it here.  I promise.

Like Loading...
You guys know I struggle with writing “happy poems.”  When I sat down to write this, I intended it as a kind of “Happy Autumn” poem to all my friends.
I wound up using the fires of Hell as its central motif.  Oh well.  It actually does have a positive message.  Really!  Give it a glance!  So, Happy Autumn, guys!!  And … y’know … go to hell?
“All Our Faults Are Fallen Leaves”
Again an annual angled auburn hand
announces advancing Autumn —
fingers aflame, the first Fallen leaf,
As slow in its descent, and as red,
as flailing Lucifer.
Hell in our sylvan vision
begins with a single spark.
The sting of the prior winter
subsided in July,
eroded at August.
Now, as at every September,
let new and cooler winds
fan a temperate flame.
May this nascent season only
bring brick-tinted perdition
and carmine Abaddon.
Where flames should burn, may there be
only rose tones on wide wine canvasses,
tormentless florid scarlets,
griefs eased in garnet trees.
What I hold in my heart to be true
is Edict at every Autumn:
Magentas may not make
forgetful a distracted God,
unless we ourselves forget
or burn to overlook.
Auden told us “One Evening”
to “Stand, stand at the window,”
and that we would love our neighbor,
but he didn’t counsel at all
about how we should smolder there.
Outside my window, and yours,
if the Conflagration itself
acquits us all by claiming only
the trees upon the hill,
the Commonwealth a hearth,
Virginia an Inferno,
Then you and I
should burn in our hearts to absolve
ourselves and one another,
standing before the glass,
our curtains catching,
our beds combusting,
our bureaus each a pyre.
Take my hand, my friend, and smile,
there on the scorching floor,
beneath the searing ceiling and
beside the blackening mirror
that troubles us no longer,
for, about it, Auden was wrong.
God’s wrathful eye
will find you and I
incandescent.  The damned
are yet consigned to kindness.
All our faults are Fallen leaves.
Forgive where God will not.
Out of our purgatory
of injury’s daily indifference,
let our Lake of Fire
be but blush squadrons of oaks,
cerise seas of cedar, fed
running ruby by sycamore rivers,
their shores reassured
by calm copper sequoias,
all their banks ablaze
in yellowing eucalyptus.
Let the demons we hold
harden into bark
holding up Inferno.
All their hands are branches now;
all their palms are burning.
There, then, softly burning, you and I,
may our Autumn find
judgmentless russets,
vermilion for our sins,
dahlia forgiveness,
a red for every error,
every man a love,

every love infernal,
and friends where devils would reign.
(c) Eric Robert Nolan 2015
— Author’s note: the poem to which I’ve responded above, with its images of standing at the window and the mirror, is W. H. Auden’s “As I Walked Out One Evening.”

1)  Portrait of the Artist as a Jung Man

3)  Pay No Attention to the Nerd Behind the Curtain

5)  Eric Robert Nolan: Sleep With Me and I’ll Write a Poem About It

11)   Eric Nolan: Preternaturally Garrulous (I’ve been told that I overuse both words.)

12)  The Writing of Eric Nolan: More Wolves and Birds than a God Damn National Forest

16)  British People Are Mean To Me

I’m still celebrating Dagda Publishing’s “first birthday” (I’m snapping up the free fiction titles as quickly as anyone else), and I hope that their staff and editors get a nice break now that the publishing house is a year old.  (They do work hard, really.)

I myself am worried about the “Terrible Twos.”  Is that when they start yelling and throwing their spaghetti against the wall, and picking things up and saying “MINE?”

Seriously, though, Dagda is a wonderful independent publisher — they are a tremendous boon to new and emerging writers, to whom they extend invaluable opportunities for exposure.  I know I am very fortunate to have had Dagda help me find my voice and reach an audience.  Here’s a link to one of the first poems I published with Dagda, “Our Room In Brooklyn.”

If you’re on the fence about whether to download “The Dogs Don’t Bark In Brooklyn Any More,” that … makes little sense if you’re a Kindle user, because it’s free for a limited time at Amazon right here:

But if you’re still on the fence, you can hear me chat it up with the wonderful Angela Yuriko Smith on BlogTalkRadio’s “Journal Jabber” Internet radio show:

It was brutal and amazing.  Where Season 1 was extremely good, the closing episodes of Season 2 have made the NBC thriller nearly perfect.  I actually think the show has reached the point where it actually improves on the Thomas Harris novels, as the better films (“Silence  of the Lambs” and Ridley Scott’s “Hannibal”) did.

I’m not even sure where to begin.  The dialogue is downright beautiful.  And this is a big improvement over the first season — in their zeal to portray highly intelligent characters, the screenwriters seemed to try to make every line sound brilliant — and it sometimes backfired awkwardly.   Repeated phrases and forced wordplay made the story’s accomplished academics sound like garrulous undergraduates trying to impress freshman girls at an off-campus party.  (Trust me, I know how they talk because I was one.)

In the latter episodes of season 2, the writers seemed to have gotten their game on.  You actually do get the sense that these are incredibly bright people discussing their worldviews and motivations.  I am not the most cerebral guy out there, and I’m the first to admit it — but I really feel that there were some goddam compelling examinations of themes like sociopathy, the sanctity of life (or a sociopath’s inability to perceive it), mortality, grief and bereavement, God and morality, and forgiveness.

I can’t believe I am saying this, but I think the screenwriters actually exceeded Harris’ prose in rendering Hannibal Lecter as a three-dimensional character — and this is coming from someone who LOVED Harris’ baroque “Hannibal,” which examined Lecter at far greater length than “Silence.”  For the first time, we get a coherent sense of an ideology for the character, linked closely to his inability to feel empathy and his apparent inability to feel love for other people.  And because the character is a genius and the dialogue here has improved, it’s very well articulated.

Lecter kills people (and fears his own death very little) because he perceives them as objects, in only physical or aesthetic terms:  “We are orchestrations of carbon, you and me — all our destinies flying and swirling in blood and emptiness.”

The characters themselves are better this season.  I’m sure that many others will disagree, but I think Season 1 failed to give us a truly likable main protagonist.  Will Graham, as scripted and as portrayed by Hugh Dancy, was too weak, self-absorbed and charmless to be a leading man in a police thriller.  It made me miss Clarice Starling, who was strong despite her vulnerabilities, both in the books and the films.  I wanted her to appear, all juiced up with girl power and dead-Daddy-Freudian-sublimation, and bitch-slap a little FBI training into Graham — maybe make him run that Quantico obstacle course a few times to toughen him up a little.   Starling is Naomi Wolf with firearm training, and she’s awesome.  The leading man on NBC’s show, for me, seemed to be Jack Crawford, expertly played by Laurence Fishburne.

That has changed.  Now that Graham has completed a certain character arc (I’m trying to keep this spoiler free), the new, darker, badass Graham (who often seems psychotic himself) is a terrific character to root for.  And he’s now frightening himself — his “Oh, yes.” line at the start of the finale gets under your skin just fine.  Nice work, Mr. Dancy.

I’ve criticized both Dancy and Mads Mikkelson in the past for their interpretations of characters Graham and Lecter.  Now I wish I could take it back.  Their work in the last three episodes was amazing.  They play off each other perfectly, and both actors handle heavy-handed lines perfectly.  Caroline Dhavernas is also wonderful as Alana Bloom — this actress has a great range, and is especially skilled at portraying shock and surprise.  I can’t imagine that’s easy for any actor, especially considering multiple takes.  She’s great as an audience surrogate for any horror film or dramatic thriller.

As has always been the case, the directing, the use of imagery, the recurring motifs and color, and the musical score was just wonderful.

There isn’t much more that I can say without spoilers — beyond the fact that the finale was quite sad, even by the standards of serial killer thrillers.  The ending of Graham and Lecter’s “friendship” was surprisingly moving.  Lecter’s final assault on Graham’s happiness was … sadistic.  And it’s heartbreaking when one character’s kindness to another is not repaid.

All in all, this is fantastic television.  I’d rate “Hannibal” Season 2 a perfect 10. 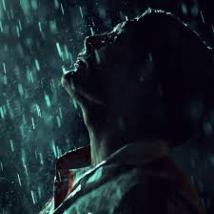 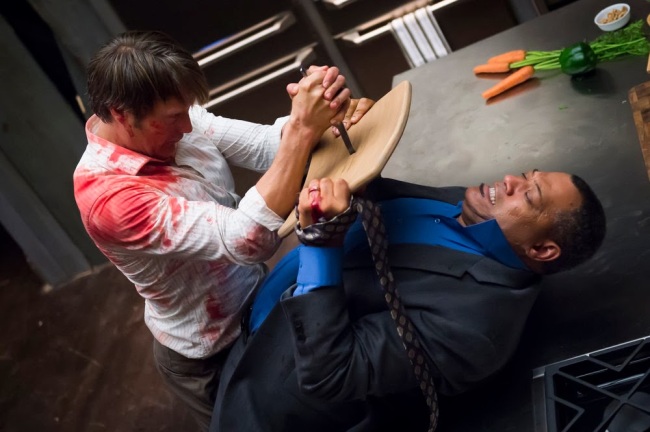 I am reposting the link to my free zombie tale, “The Siege of Fort Buzzard,” in light of the extremely positive feedback the story has gotten from readers over at the “Tales of the Zombie War” website.

I finished this story feeling that it was not my best work — then was pretty surprised at how much people loved it. Just look at the comments section 🙂

Enjoy, and remember to aim for the brain!